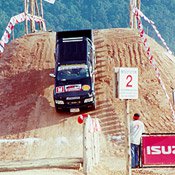 KOH KEAW: Watcharin Areerob and his team, all from Phuket, won the southern qualifier for the Isuzu Di 4×4 National Championship Rally on Saturday in a 2.8-liter Isuzu Rodeo with a total time over the six stages of 10 minutes 28 seconds. Rodeo 4WDs dominated the rally, finishing in four of the top five places. The exception was Amnuoy Somjai’s team, also from Phuket, who competed in an Isuzu Vega. They crossed the line in 10:33 min to claim second place. Preecha Thanapreedakul’s team came third, five seconds behind. Sarayut Machomsomboon’s team and Adtawut Rodkerd’s team tied for fourth place with an identical time of 10:47 min. The judges awarded fourth to Sarayut on the basis that his team had won more stages than Adtawut’s. The top five crews in the event, which attracted 36 teams from southern Thailand’s 14 provinces, now go forward to the national finals in Pattaya on November 24.