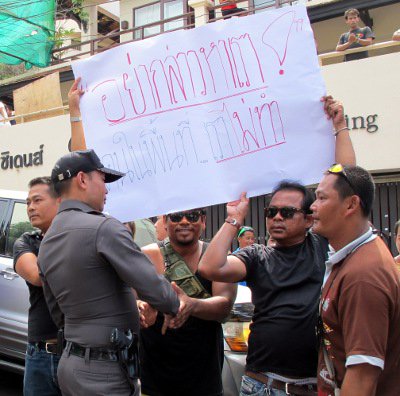 PHUKET: Police staved off scenes of chaos this morning as local residents shouted out insults at the two suspects who were required by police to carry out a public re-enactment of the botched bag-snatch that led to the fatal stabbing of Australian tourist Michelle Smith.

Police intervened and kept the angry crowd members at bay.

Surasak Suwannachote, who confessed to stabbing Mrs Smith, and Surin Thatthong, the driver of the motorbike used in the attack, re-enacted the crime in front of the Katathani Phuket Beach Resort this morning.

However, as the two suspects tried to carry out their instructions, some members of the 100-strong crowd closed in.

“Take them to the prison. Take them there and make them comfortable, feed them well and offer them a free place to stay forever,” one lady called out sarcastically.

“You are such a rubbish…You are a citizen of this country, but you are such an embarrassment for this world,” yelled another woman.

Police were ordered to stand by several members of the crowd to make sure tempers did not get out of control.

Some villagers held signs up saying “We are local residents, we will not ruin Phuket” and “We are Karon residents, we don’t welcome people from other provinces who cause trouble”.

To avoid potential violence, police sped along the process by having officers create “safe corridors” through the crowd and keeping the more vocal members close at hand.

Many of the locals also praised the police for catching the two suspects so quickly, some even broke into applause.

“Thank you for catching them, and thank you for keeping them off the streets,” one man shouted.

After the re-enactment had concluded, the signs were posted on to a prominent roadside wall near the hotel – as a deterrent to other criminals looking to operate in the area.