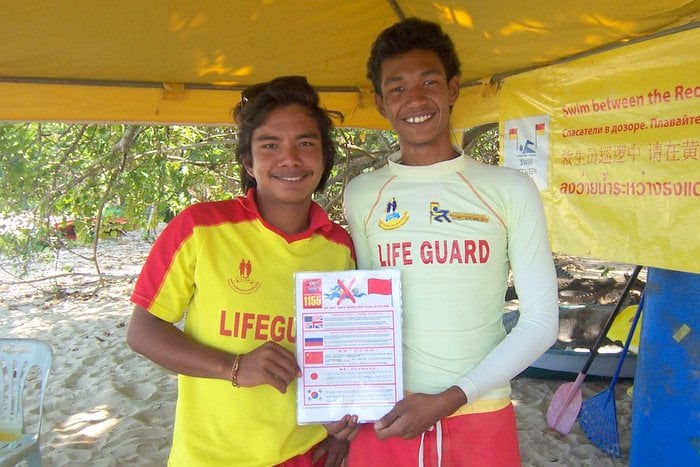 PHUKET: To break the communication barrier with non-English-speaking tourists, and hopefully save their lives, Phuket lifeguards have been issued multi-language cards that explain the dangers of the rip currents that lurk along the island’s beaches and entering strong surf.

The cards are the brainchild of Simon Luttrell, a Tourist Police Volunteer who helps foreign tourists at Phuket International Airport and at hotels in the Nai Yang and Mai Khao areas.

“Every year, tourists drown at Phuket beaches,” he told the Phuket Gazette. “From the reports of these incidents, it seems that some foreign tourists do not understand the potential dangers of strong waves and rip currents – and some tourists choose to ignore these dangers.”

From speaking with many of the lifeguards, it seems that the problems mainly occur with Chinese and Russian tourists, Mr Luttrell added.

“In a nutshell, the Chinese tourists don’t understand the lifeguards and the Russians don’t believe them. The former is a language comprehension problem, and the latter is, frankly, a bravado problem,” he noted.

To assist the lifeguards in communicating with foreign tourists about the meaning of the red flags – “no swimming – dangerous” – and the importance of heeding lifeguards’ warnings, he designed and printed a multilingual, laminated advice card that the lifeguards can show to tourists who are unable to understand English, or who believe they are stronger than the rip currents.

“The card stresses the importance of following the lifeguards’ advice, even if the sea conditions do not appear dangerous. An image of a red flag and a swimmer with a large red cross emphasizes that tourists must not swim when the red flag is flying,” Mr Luttrell explained.

He distributed the A4 card, printed in English, Russian, Chinese, Japanese and Korean, to lifeguard stations at all Phuket beaches – paid for out of his own pocket.

“If this card can reduce the number of drownings, then it is my money well spent,” he said.

“The card is also available free to tour companies who provide sea trips to foreign tourists, especially those tourists who are not familiar with water activities, such as snorkelling.”

The lifeguard-warning cards follow suit in Mr Luttrell’s “Have a Happy Holiday” cards, which highlight six dangers for tourists to be aware of during their stay in Phuket.

“These cards are featured in the lobbies of most of the hotels in my region: the airport, Mai Khao, Nai Yang,” he said.

The cards, in English, Chinese and Russian, warn of: 1) Rip tides and beach flag colors; 2) Pickpockets; 3) Jet-skis; 4) Riding motorbikes; 5) Respect for environment and cultural sensitivities; and 6) Attire when away from the beach.

“Several hotels have asked for the jpeg file for this card so that they can print and place this advice card in all their guest rooms,” Mr Luttrell noted.

Mr Luttrell invited all people who work with or regularly encounter tourists about to enter Phuket’s surf to contact him for the free cards at 096-3566040.