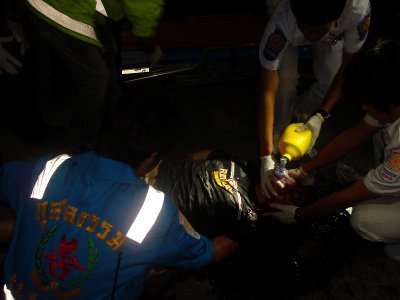 PHUKET: A Phuket lawyer died after plummeting from his third-floor apartment in Wichit last night, allegedly due to the humiliation of arguing with his girlfriend in front of apartment staff.

Puwanart Pijansophon, 48, worked as a lawyer and also helped his relatives run the apartment complex that he fell from on Soi Jai Lau U-Thit 2 off Chao Fa East Road.

Mr Puwanart had a fight with his girlfriend about getting more ice for the drinks that they were having in his third-floor room with a group of people who worked at the apartment complex, explained Lt Col Chetsada Saengsuree of the Phuket City Police.

“He argued with his girlfriend in front of the workers, which humiliated Mr Puwanart a great deal. Then his girlfriend left the room in order to avoid any more arguing,” Col Chetsada said.

“After his girlfriend left, Mr Puwanart was upset about what had happened. So climbed out the window of his apartment and jumped,” he said.

Although alive after the fall, Mr Puwanart died as Kusoldharm Foundation rescue workers and Vachira Phuket Hospital staff attempted to transport him to Vachira Hospital for treatment.

Police are still questioning other apartment residents in order to conclusively determine the motive for Mr Puwanart jumping from the building, added Col Chetsada.