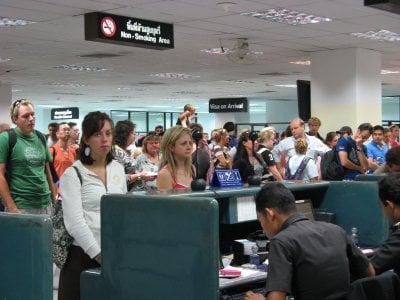 PHUKET: Airlines that launch a service connecting Phuket with a “new” destination will have their landing fees for all flights on that service slashed by 95%.

As an added bonus, airlines that open any such new routes will receive 70 baht per passenger on any scheduled flights landing in off-peak hours: from 1am to 8:59am and 10pm to midnight.

Effective November 1, the massive discount and the cash-back bonus are part of a new incentives scheme launched by Airports of Thailand (AOT).

Chartered flights bringing passengers from new destinations will receive also the 95% reduction in landing fees, but only 35 baht per passenger landed off-peak.

The AOT has stipulated that a new route will be classified as such for only one year, after which it will be considered an existing route. The cash bonus for passengers landed on “new” routes will continue after the first year.

Any international airline may take part in the scheme, as long as they have a clean record and no outstanding debts with the company, said the AOT.

From May to October this year, 31 carriers have been operating from Phuket Airport, of which 25 are foreign airlines operating chartered and regular flights to 28 international cities in Asia and Europe.