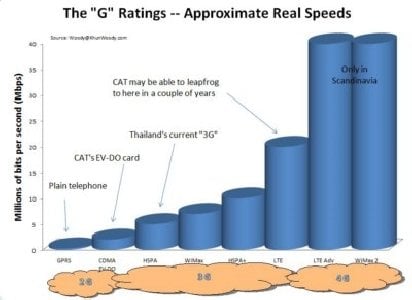 PHUKET: Local computer guru Woody Leonhard will be the keynote speaker at a meeting of the International Business Association of Phuket, or IBAP, this evening.

Khun Woody will speak on the current state of Internet access in Phuket in a program
entitled: Internet in Phuket: 3G, 4G, No G 4U.

He will talk about 2G, 3G, and 4G phones, and “explain why most of what you’ve read and heard about is pure marketing drivel”.

“Don’t waste your money on technologies that don’t work in Phuket,” he warns.

Khun Woody will show results of 3G tests all over the island – important information for people thinking about buying a 3G or 4G phone or considering a change of Internet Service Provider.

“Speeds have more than tripled in the past year and you can probably get better than what you have now, if you know where to look and what to buy,” he said.

The IBAP talk will be held at the Thai Naan Restaurant at the Darasamuth School Junction in Wichit, across from Central Festival Phuket.

Doors open at 6:15pm. The standard entry donation for IBAP members is 200 baht, while visitors are asked to donate 400 baht. Admission includes a buffet dinner and complimentary drinks.