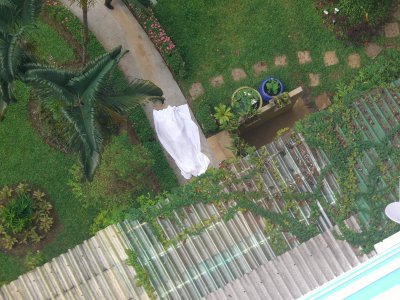 PHUKET: A young Norwegian man took his life this morning by jumping from the 13th floor of a Phuket hotel.

The 26-year-old, whose name is being held pending notification of kin, was found dead on the grounds of the Phuket Palace Hotel in Patong just after 10:30am.

Capt Weerapong Rakkitteo of the Kathu Police said CCTV camera footage taken at 10:41am clearly showed the man getting off the 13th floor elevator.

The cameras recorded him taking three or four minutes to scale a wall, then jumping to his death, landing on a walkway in the garden area below.

Staff at the hotel said the Scandinavian checked in on November 3 and his mother transferred funds from Norway daily to pay for the room.

He had little interaction with the staff and just went straight to his room, they said.

A bar girl staying with the Norwegian said he had bought toys for his three-year-old daughter, then became depressed when he learned that the child had suffered a broken arm, police said.

According to one report, the bar girl was a 29-year-old who worked on Soi Easy, off Soi Bangla. She was on the scene when police arrived.

Peter Biwo, a German guest at same hotel, said he saw the man’s body pass from above as he was standing on the balcony of his own room on the 11th floor.

Police have already notified the Norwegian Consulate in Phuket, who told the Gazette this afternoon that the man’s family has not yet been notified – despite reports to the contrary.

It is not the first time a 26-year-old Norwegian has plummeted from a room at the Phuket Palace.

In January last year, 26-year-old tourist Hans Christian Dalen accidentally fell from the balcony of his eighth-story room at the hotel after a night of drinking and partying.

The lucky Mr Dalen miraculously survived the fall with only minor injuries when he landed on the zinc roof of a Burmese laborers’ camp on the ground below.