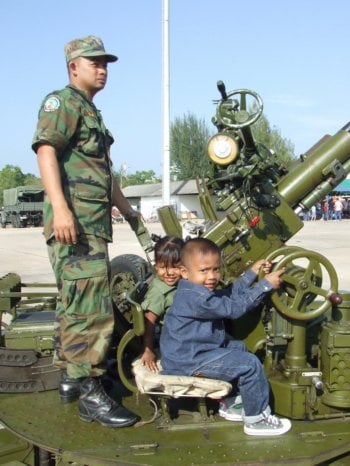 PHUKET: Tomorrow is Children’s Day. Around Phuket, many government, public and commercial venues will be putting on free entertainment for the island’s little people and their families.

Normally restricted government offices will open their doors and to allow young visitors inside for educational tours and information. Strong moral values, health and education are an important message promoted and rewarded on this holiday.

Phuket Aquarium at Makham Bay is putting on a variety of fun and free shows for children from 8:30am to 4:30pm. Edutainment on offer includes free entry into the aquarium for children under 14 and the chance to try out some of the Marine Biological Center’s scientific equipment, including examining marine life under microscopes.

The Third Area Naval Command at Makham Bay opens its gates to families from 8am to 4pm, allowing the public to climb aboard the aircraft carrier HTMS Chakri Naruebet and Navy helicopters.

Central Festival Phuket is hosting a variety of special Children’s Day events today between 1:30pm and 3:30pm and on Saturday from 11:30am to 6pm.

Children’s health is the focus of today’s events with the Phuket Rotary Club of Tongkah and The Thai Red Cross Society sponsoring free eye exams and discounted eye-glasses.

On Saturday, the morning kicks off with a dog show and baby crawling races, followed by a children’s singing competition. Children will receive free ice cream.

Bangkok Hospital is holding a Happy Kids 2010 celebration on Saturday from 9am to 1pm. Besides promoting good health, the hospital event will feature a ‘green’ fashion show with recycled clothes, games, gifts and free ice cream.

Jungceylon shopping center in Patong is putting on a Kids Fun Fair on Saturday from 11 to 6pm. At the shopping center’s Port Zone, children can enjoy free gifts, a comedy show and a performance by The Balloon Man. Children can have their picture taken with giant balloon characters and participate in balloon animal workshops.

Other Children’s Day activity locations around the island:

Phuket Provincial Hall 9am to 3pm

Chalong: Chalong Temple 8am to 5pm.

Kathu: Prince of Songkla University 8am to 12pm.