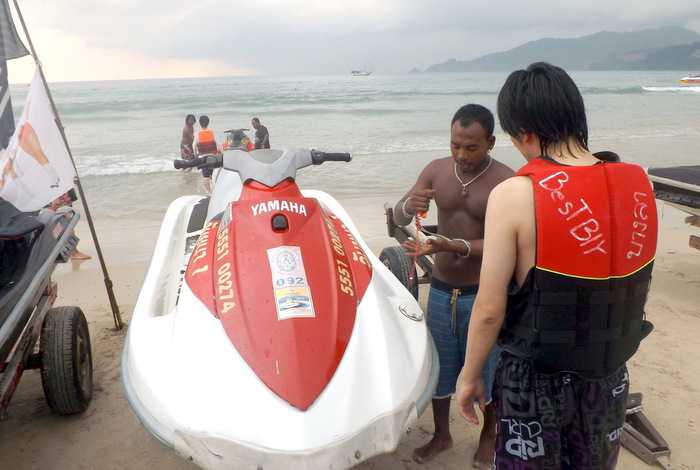 PHUKET: Jet-ski operators will continue renting out their machines to tourists on the island’s beaches despite mishaps, injuries and the death of a Russian tourist killed in a jet-ski accident this week.

Phuket Marine Office Chief Phuripat Theerakulpisut announced the news on Tuesday, when he explained to Phuket Governor Nisit Jansomwong that jet-ski operators could stay as long as they followed the new rules brought into effect on October 1.

If they fail to follow the rules, they face invoking an island-wide ban on all jet-skis, he said.

However, the ultimatum was Mr Phuripat’s second “last chance” warning. On Tuesday, he vowed to revoke the permits of any operators whose businesses or jet-skis were involved in any untoward incidents.

“If they fail to comply with the new regulations or are involved in any major accidents, they may lose their right to rent out jet-skis entirely,” he said (story here).

That warning came on the same day that a female tourist who was lying on a mat on Kata Beach was run over by a jeep towing a jet-ski trailer. The woman suffered only minor injuries as the jeep drove over her, with its wheels plowing the sand on either side of her (story here).

Four days later, a jet-ski came dangerously close to hitting a surfer and children playing in the water at Surin Beach, a precursor to a fatal jet-ski accident at Patong Beach on Monday.

Russian tourist Iliya Muryndin, 29, died after he fell and struck his head on the rented jet-ski he was riding in the strong surf in Patong Bay (story here).

“He rented a jet-ski at about midday. He fell and hit his head on the jet-ski while riding large waves,” said Maj Weerapong Rakito of the Patong Police.

Beach guards rushed into the surf and recovered Mr Muryndin, who was unconscious.

“He was rushed to Patong Hospital and then transferred to Vachira Phuket Hospital in Phuket Town, but was pronounced dead on arrival,” Maj Weerapong said.

At the meeting on Tuesday, Governor Nisit expressed sorrow for the death of the Russian tourist.

“It was a sad accident. We will continue to evaluate jet-ski safety to make sure they are doing a good job,” he said.

Mr Phuriphat assured Governor Nisit that appropriate action would be taken on any further incidents.

“I have ordered the Bang Tao Jet-Ski Club not to allow jet-skis to operate on Surin Beach, as it is a no-jet-ski zone. I have also reiterate to other jet-ski operators on the island what I’ve said with regards to breaking the rules,” Mr Phuripat said.

“If jet-ski are seen on Surin Beach again, I will take the issue to Governor Nisit and ask him to revoke the licenses of all jet-ski operators in Phuket,” he warned.

“The rules have been put in place for a reason. If they are not adhered to, we will have no more jet-skis on the island.

“We cannot check up on operators all the time, so it is up to the jet-ski clubs to self-regulate and make sure operators are not breaking the rules.”

A key condition of the rules is that jet-skis can no longer be parked on the beach. Instead, they must remain in the water or otherwise be removed completely from the sand (story here).

“The operators will have 12 areas in Patong where jet-skis may remain in the water near the beach. These areas will lie between 16 roped off swimming zones,” Mr Phuripat explained.

“Each swimming zone will be 150 meters wide at the beach and extend 50m into the water. Buoys will be attached to the ropes to mark the outer boundaries of the swimming zones, which will be 100m wide.”

Parasail operators will also be allowed to keep working from the beaches, but not in areas where jet-skis come and go, Mr Phuripat confirmed.

“There are 286 jet-ski operators and 36 parasail operators registered with us. They all have insurance.
There will be no more,” he assured.