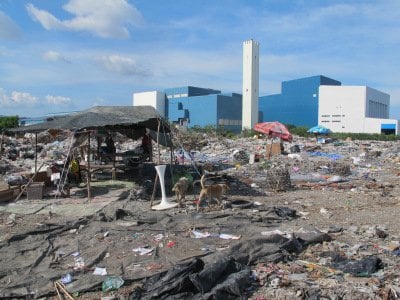 PHUKET: Phuket’s main landfill site on the outskirts of Phuket Town is a long way from disappearing, despite the new 960-million-baht incinerator working at near-capacity of 700 tons of trash a day.

Prachum Suriya, chief of the Phuket City Municipality Environment Office, confirmed to the Phuket Gazette on Wednesday that the landfill site is “100 per cent full”.

Earlier in March, Mr Prachum told the Gazette that once the new incinerator was fully operational, his staff would start using the “extra burn capacity” to burn off the landfill.

However, with 600 tons of new rubbish turning up at the facility every day, the process of clearing the backlog has slowed dramatically.

“Right now the need is for over 500 million baht to fix the old incinerator. With that working we will be able to burn 250 tons per day to get rid of the landfill,” Mr Prachum said.

“However, even after we have received the funds, it will still take two years to complete the repairs,” he added.

“To renovate the landfill site for future use, we will need another 89 million baht. I have already presented the case to the mobile Cabinet meeting in March and now we are keeping track of the process to get the budget,” Mr Prachum explained.