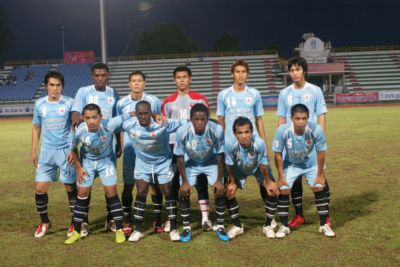 PHUKET CITY: Phuket FC registered their first ever point at home at Surakul Stadium following a keenly contested match against Krabi on Saturday night that ended 0-0.

Phuket enjoyed the lion’s share of possession in the first 45 minutes, but it was Krabi who had the best chance to open the scoring when their striker was given time and space in the penalty area.

Fortunately for Phuket FC keeper Suthep, the rebound was blasted straight at him.

The Sea Dragons’ giant Cameroonian striker Peka came the closest to breaking the deadlock, smashing a volley against the Phuket side’s crossbar midway through the first half.

The second half saw a much more even contest as both teams shared possession.

Suthep was called into action once again, tipping a dipping free-kick over the crossbar. At the other end, a dangerous ball from Phuket FC’s Pisarn Kayankit went across Krabi’s six-yard box, slipping past players from both sides.

As the game headed into the final minutes, the attending Phuket FC fans started to believe their side could score its first ever point at home.

Their nerves were tested one final time when Krabi were awarded a free-kick deep into stoppage time.

The ball was floated into the box but was comfortably dealt with by the home side, allowing the Sea Dragons to close out the game and claim a historic first point at Surakul.

Phuket FC’s final match of the season is away at second-placed Satun on Saturday August 22. Kick off TBC.