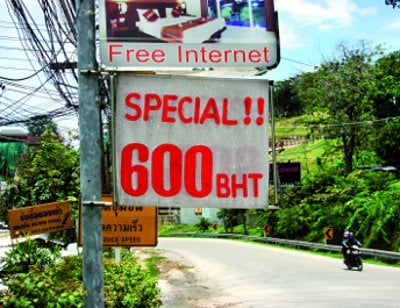 PHUKET: In a bid to keep small hotels and guesthouses in Patong from falling into bankruptcy, a group called the Patong Hotel and Guesthouse Association (PHGA) is calling for hoteliers to end current price wars by agreeing to set minimum room prices.

The informal consortium of hoteliers wrote in its “Letter of Awareness Awaking” sent to members last week: “During the past high season, even on New Year’s Eve, several hotels where selling good rooms at 700 baht per night. This year, new hotels have opened up nearby and I am afraid that due to competition the prices will go even lower than that,” the statement read.

“If a solution is not found quickly, for the incoming high season this ‘war of prices’ will continue and even though the number of customers may increase, lower room prices will not be sufficient to cover all the costs and many hotels will face bankruptcy,” it warned.

The letter suggested adopting several “price seasons” and a basic framework for classifying standard rooms so that minimum prices could be agreed on by any hotel joining the campaign.

However, the letter also recognized the limited impact the campaign would have if only a few hotels took part. It also acknowledged that classifying and categorizing rooms would be a “difficult task”.

The PHGA listed a downturn in tourist arrivals, operating cost increases and the strengthening of the Thai baht as factors contributing to the crisis, but it identified the main culprit as oversupply.

According to the the most recent Tourism Authority of Thailand (TAT) figures, Patong has 14,821 rooms in 264 “accommodation establishments”, or about one-third of the total 43,036 rooms on the island.

“People do not come to Patong because the rooms cost 500 baht. They are coming anyway and they are used to paying more. It is the ‘war of prices’ between the hotels which has set the prices so low,” the letter read.

“Even though there is still an economic crisis in [the] USA and in Europe, a room for 1,000 baht is still a cheap room. But of course, if we sell it cheaper, anyone will be glad to pay as [little] as they can,” it continued.

“I think working on this terrible price dumping that is happening everywhere is very good. It’s a sad story that the hotel rates in Thailand, including Phuket, are 30% less than anywhere else in Asia,” he said.

Creating better marketing awareness and sales training would be much more effective than setting certain rates, because implementing something like this in Thailand is ‘mission impossible’, he said.

Preechavude “Prap” Keesin, President of the Patong Taxi Federation and son of Patong Mayor Pian Keesin, agrees with the proposal.

“If this problem goes on, it may cause business operators to suffer and ruin confidence in investing in Patong,” Mr Prap said.

“The real problem is that oversupply has forced prices down, and I think it would be better if the prices were regulated,” he added.

Despite agreeing that a state of oversupply exists, Mr Prap’s Pisona Group last week reportedly took the first step towards applying for permission to build a new 744-unit resort across 20 rai high in the Patong hillsides. If completed, the project would be the largest on the island in terms of room numbers.

Phuket Chamber of Commerce (PCC) President Dr Sirichai Silapa-archa disagrees with minimum prices, arguing that the forces of supply and demand should be left alone.

“There should be a better solution. The problem is too many rooms and not enough customers. If prices were set [artificially] high, they wouldn’t sell and trade would go ‘underground’,” he said.

Suchart Hirankanokkul, President of the Thai Hotels Association (Southern Chapter), was also wary of the legality of such ‘price fixing’.

“Actually they cannot do that; it’s competition in the free market and without legal support there would be no way of making sure [PHGA] members cooperate,” he said.

What they should do is call a meeting and just ask for cooperation to stop the price war,” he said.