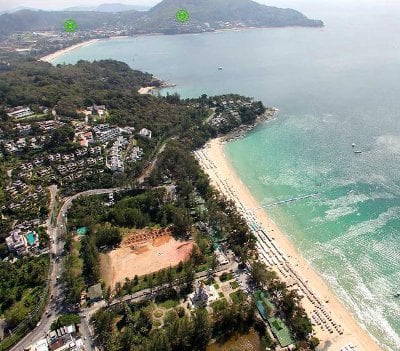 PHUKET: The hoteliers of eight resorts who have appealed to the Phuket Governor to not approve the huge Sydictive new year party at Surin Beach have claimed that just the announcement of the event by global celebrity Paris Hilton has already cost the resorts 8 million baht in room cancellations.

Among the hoteliers chief concerns are the level of noise the two-day dance party will create and the impact of the expected 50,000 revellers in the small beachside resort area.

Twinpalms Phuket Resort Executive Manager Somjai Tungkoo told Governor Maitri Inthusut at a meeting on Tuesday that the “peaceful” surroundings of Surin Beach were a critical marketing point for the resorts in the area, and that hosting the party was already jeopardizing high-season bookings.

“Tourists have cancelled their room bookings after they realized that this event will be held at Surin Beach,” she said.

“Each hotel [of the eight protesting the party] has suffered room cancellations valued at about one million baht,” Ms Somjai added.

“This event will affect us not only for this year, but also for the years to come. We think that it is not necessary to hold such big events here,” she added.

A representative of The Chava Resort agreed. “Many guests have asked about this issue. Some have cancelled their rooms already,” he added.

The representative suggested that the organizers hold the event during the tourism low season, as it might help boost tourism during that time of year.

Ms Somjai also pointed out that no hotels in the area were notified that such a big event was being organized.

“There are small new year parties on the beach every year, but the hotels are notified of them in advance. We still have not been formally notified of this event,” she said.

However, Supacheep Wanchai, director Sydictive Element, said they will keep the noise down and employ thousands of security staff to make sure the revellers do not disturb the neighbors.

“This event will start at 3pm on December 30 and continue through to 6am on January 1… We expect more than 50,000 people will join this event, including the international celebrity Paris Hilton and 14 world-famous DJs. We will also hire 4,000 staff,” Mr Supacheep said.

The event will feature a floating stage 70 meters long and 20m wide, with a firework show each night, he added.

Mr Supacheep said that the noise will be kept below 100 decibels.

“We will use local vendors for sourcing all the food for welcoming guests to the party and we will coordinate with local bus, van and taxi operators.

“There will be about 2,000 security personnel to make sure there is no trouble and we will conduct searches to make sure that no drugs or weapons are anywhere near the party,” he said.

“Surin Beach is a suitable location for this,” he added.

Gov Maitri ordered the event organizer and the hotel representatives to meet again to try to resolve the issue.

“I believe that every problem has a solution, and in organizing any public event we should be wary of how it will affect local people,” Gov Maitri said.

“As this event seems to have not been discussed with the relevant local authorities, different opinions have not been taken into consideration before moving ahead with arrangements. There should be further discussion and an attempt to brainstorm solutions to the potential problems before we move ahead,” he added.

In the meantime, Phuket Marine Office chief Phuripat Theerakulpisut must approve the event before it can be held.

“For now, the Phuket Marine Office has no intention of approving construction of the event’s floating stage or any other structures on the beach until all parties are in agreement and the Thalang District Office has approved the use of the public area,” he said.