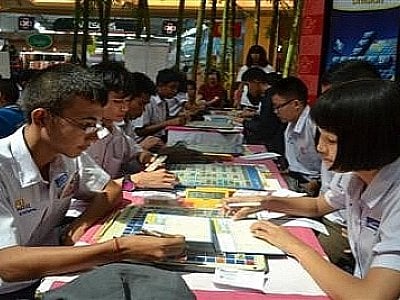 PHUKET: Some 700 young Scrabble enthusiasts are in Phuket this weekend to compete in the southern regionals of the 5th annual CyberDict Crossword competition.

Grouped into three age categories (primary, lower secondary, upper secondary), the students are vying for places in the national finals to be held in Bangkok at the end of the year.

Techus Pogool, a 16-year-old from at Benjamarachutit School in Nakhon Sri Thammarat, told the Gazette at noon yesterday that he won his two morning matches and was preparing for four or five more rounds to be played that afternoon.

“I usually compete at the provincial levels, but this is my first time in the regionals. I won two games in the morning and there will be four to five more games to play against in the afternoon,” he explained.

The students play seven or eight English-language games a day trying to amass points. Those with the most will be declared the winner on Sunday afternoon, he said.

“I normally spend 30 minutes to one hour per day to practicing, playing against myself and reading up to increase my vocabulary. If I get the chance to go to the national finals I will have to practice even harder,” he said.

Students from Hat Yai Wittayalai School in Songkhla and Sriyapai School in Chumphon were competitors to keep an eye on, he said.

Mr Techus said the vocabulary he picked up playing Scrabble would not likely result in a higher grade on his university entrance examination.

“It is different. I don’t think this can be used to prepare for the entrance exam, but it is a fun and relaxing form of brain exercise for me,” he said.

Another student from Benjamarachutit School, 18-year-old Thitipong Boonyaprasart, is a relative newcomer to Scrabble, having started to play last year.

“I usually play Scrabble on a computer. But playing against a human competitor is different. It is harder and I feel a lot more pressure,” Mr Thitipong said.

He prepared himself for the competition by reading two- to three-letter words in English, he said.