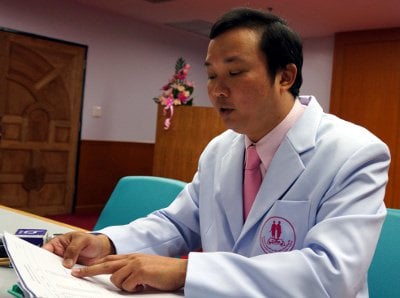 PHUKET: The director of the Phuket Provincial Administrative Organization (OrBorJor) Hospital today denied accusations that his hospital was “unethical” in its practices, which a man yesterday formally alleged contributed to his mother’s death.

Hospital Director Dr Chack Somana today refuted allegations leveled yesterday by Narongphon Suwanmosee, who claimed that the hospital refused to allow his mother, Pa Khongjean, to be transferred to Vachira Phuket Hospital for continuing treatment because of an outstanding medical bill.

“I deny all the accusations. On behalf of the hospital, I can say that we are truly ethical with our profession,” he told a press conference at the hospital this afternoon.

“What Mr Narongphon said was not right. Our hospital does have a policy to not allow patients to leave before they pay their bills, but in emergencies we are more concerned about the patient’s condition than the bill.

“The final bill that Mr Narongphon paid on December 29 was about 87,000 baht. The total bill since his mother was admitted to the hospital was 262,547 baht. He has always paid 20,000 baht at a time. He said he could claim the money back from his company by paying the bill in installments,” he said.

“I didn’t hear anything from our accounts department that Mr Narongphon was unable to pay the bill and that he had asked to transfer his mother first and to pay the bill later.

“If I were told that, I would have allowed him to transfer his mother to Vachira Hospital because he always pays his bill,” he added.

Dr Chack also told the press that the delay in transferring Ms Pa was because they had to wait until Vachira Hospital was ready to admit her.

He also denied that hospital staff took Ms Pa off a respirator while waiting to be transferred.

“That was not true at all. First of all, Mrs Pa was not on a respirator. She only had an oxygen mask to help her breathe, and we never removed that while she was being transferred.

“Also, we kept her in the [Intensive Care Unit] ICU while she was waiting, not in an ambulance,” he added.

Dr Chack further countered allegations that the OrBorJor hospital failed to transfer Ms Pa directly to Vachira’s ICU, hence forcing her to wait in the Emergency Ward instead.

“Once Mrs Pa arrived at Vachira Hospital, she spent two to three hours in the Emergency Room since it is part of their screening process. This all depended on the opinion of the doctor there. He thought Ms Pa’s condition was still stable,” said Dr Chack.

“Mrs Pa spent at least a couple of days at Vachira Hospital before she passed away. She had so many medical conditions: diabetes, high blood pressure, a heart condition and chronic renal failure,” he added.

“On behalf of the OrBorJor Hospital, I would like to offer my condolences to Mr Narongphon and his family for their loss. I also want to give my promise that our hospital has our standards and that we work hard to try to help everyone.

“Even though we have limited resources, we devote ourselves to help everyone, and we treat everyone just like a family member,” said Dr Chack.