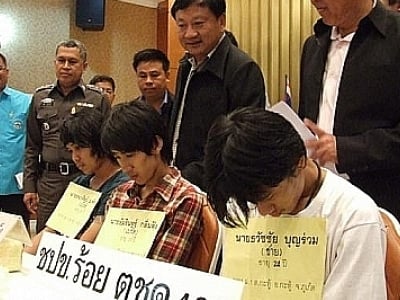 PHUKET: Police have arrested three members of a major methamphetamine trafficking ring operating throughout Phuket that is allegedly masterminded by a ‘kingpin’ resident behind the walls of Phuket Provincial Prison, officials said today.

Seized as evidence in the case was the biggest drug haul in Phuket in recent memory: 20,200 ya bah (methamphetamine) pills and 718 grams of ya ice (crystal meth).

The scale of the operation was such that a press conference held this morning at Phuket Provincial Hall, was presided over by Phuket Governor Tri Augkaradacha.

Thanasin “Bang” Na Pattalung, 25; Amarin “Bird” Klinfung, 25; and Thawatchai “Chai” Boonruam, 24, all confessed to possession of a Category 1 drug with intent to sell.

As Thawatchai was being questioned, Thanasin and Amarin, his supposed suppliers, phoned him to demand payment for the latest consignment to be delivered to an address on Soi Rattha Thamanoon, off Wichit Songkram Road in Kathu.

The pair were arrested at Soi Rattha Thamonsoon at 7pm yesterday and confessed to selling drugs. Under questioning they said they had another stash of 18 grams of ya ice in a room at the Cool Resident Apartment building on Soi Suksunti in Phuket Town.

From there they led the officers to a home at the Garden View 4 residential estate in Kathu, where police seized 20,000 ya ba pills and 700 grams of ya ice. The two men confessed that the drugs belonged to them.

The men said that a man they knew only as Mr Bang left stashes of drugs for them at points along Phra Barami Road, the main supply route to Patong. They were then paid 10,000 baht per trip for delivering the drugs to customers in Patong. All three said they had made three such deliveries in the past.

A review of the suspects phone records revealed that the men were also in regular contact with an inmate at Phuket Provincial Prison who is suspected of arranging drug deals by mobile phone.

The police have yet to determine the man’s identity because he changes his SIM card frequently, which makes tracking difficult.

The revelation that inmates are still involved in drug dealing once again raises security issues at the prison, where methods used to smuggle in contraband have included stitching them inside the carcasses of dead rodents, which are then lobbed over the wall to waiting inmates.