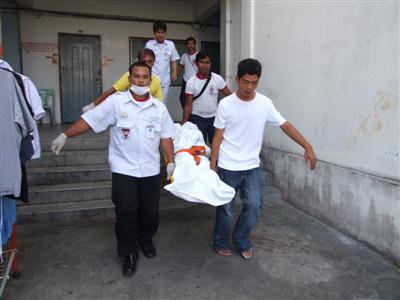 PHUKET: A lawyer who specialized in defending poor villagers in land rights cases has been found dead in an apparent case of suicide.

The body of Supachai Singjan, 54, was found hanging by the neck from a door in his apartment in Rassada sub-district yesterday.

Mr Supachai apparently tied a bedsheet to his neck, looped it over the door and bent his knees until he was dead.

Police found no sign of injury on Mr Supachai’s body except around the neck, which was bruised.

There was no sign of struggle inside the apartment, police said.

Kusoldharm Foundation rescue workers sent Mr Supachai’s body to the hospital, where doctors will attempt to determine the exact cause of death.

After questioning friends and relatives, police have established that on the morning of his death Mr Supachai went out to buy food and greeted his neighbours as normal. Those who saw him said he showed no signs of being suicidal.

Nevertheless, his younger brother told police that Mr Supachai “thought a lot about everything”.

As a result he was constantly under stress when he was on his own – the help he had given to villagers had not helped him, he said.

While evidence at the scene suggested suicide, police have not ruled out the possibility Mr Supachai was murdered.

For more than 20 years, Mr Supachai defended poor villagers in land-rights cases – without remuneration. He won many cases, and made many enemies in the process.

Police are considering the possibility that this angered an influential person who ordered Mr Supachai’s killing.

Mr Supachai’s death will sadden many in Phuket who respected him for his selfless work helping the island’s poorest communities.