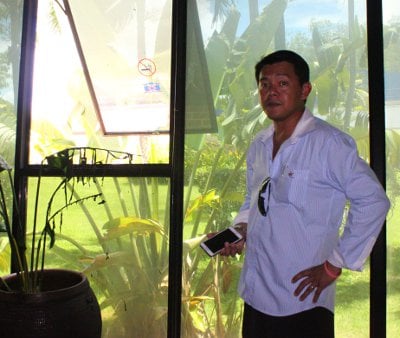 PHUKET: A security guard at ‘Phuket Healthy Nutriment and Snake Show’ remains unconscious in hospital after being knocked out by attackers and having his workplace being set afire early Monday morning.

Anuchit Chaithongngarm, 25, is currently in a coma at Vachira Hospital Phuket after being hit on the back of the head with a heavy object, said Kongpol Phanuek, chief engineer at Phuket Healthy Nutriment.

“The doctor said he has blood coagulation in the brain,” explained Mr Kongpol.

Mr Anuchit was knocked unconscious at about 1:30am, but woke up at about 4am and managed to use a pair of scissors to cut the tape that bound his hands and legs. He then called the police, Mr Kongpol said.

Due to the dark windows, it wasn’t known that the Phuket Healthy Nutriment shop on Soi Ta-iad in Chalong was afire until staff arrived to open the building at 8:30am, said Mr Kongpol.

“The staff saw the burn marks from the small fire, but it must have gone out by itself,” said Mr Kongpol.

However, before Mr Anuchit was taken to hospital, he reportedly said that four men had approached the building.

According to the shop closed-circuit television (CCTV), one of the men wore a cloth mask and broke into the shop through a window. He then spread oil down the hallway and set fire to it, said Mr Kongpol.

The fire did some damage to the shop’s furnishings, as well as to some of the building’s interior.

“Even though our property wasn’t seriously damaged, the shop will have to be closed for a week, which will cost us about 10 million baht,” Mr Kongpol said.

The costs include expected income, damages, employee salaries and so on, explained Mr Kongpol.

The incident was investigated Monday afternoon by the Chalong Police, Tourist Police and officers from Region 8 police headquarters in Surat Thani.

“They suspect that the arson was committed because of business conflicts,” Mr Kongpol said.

However, Mr Kongpol explained that the company has been open for 20 years and did not have any problems with other companies.

Since the attack, four more CCTVs were added to the eight that were already installed at the shop. Mr Kongpol also said that there will now be two guards on duty, day and night.

Though the security guard company Mr Anuchit works for will pay for his treatment, Phuket Healthy Nutriment had given some money to his family, Kongpol added.