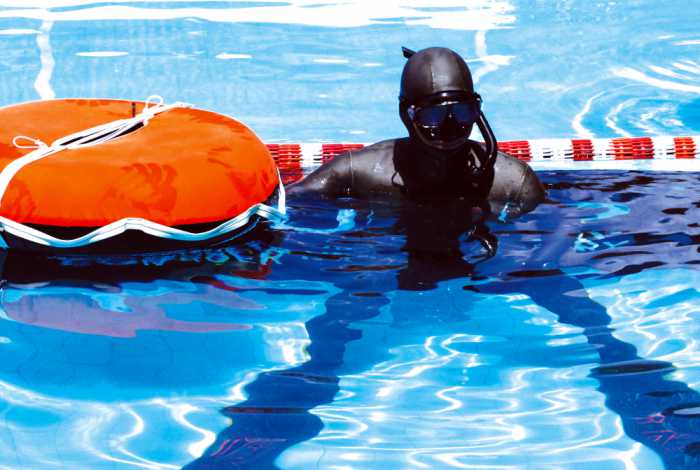 PHUKET: Freedivers slipped on a variety of fins from mermaid tails – monofins – to traditional freediving fins to put up some long horizontal dives at the We Freedive Suunto Series at Phuket Country Home late last month.

The Dynamic with Fins (DYN) event, which allows divers to use fins, but not their arms, on October 26 saw a non-ranked pre-event dive of 136 meters by Pete Botman from the Netherlands.

American Walter Johnson covered 104m and Melanie Long from the UK kicked her way to a 75m finish.

Vladimir Botko from Slovakia covered the longest distance during the competition –107m. However, Botko breached the surface during the dive and received a yellow card and a five-point penalty.

“The penalty was applied because he was not swimming underwater toward the end of his dive, but at the surface – and that doesn’t count as diving,” AIDA judge Richard Wonka told the Gazette.

However, it was Long who was on pace for some larger scores down the line.

“Melanie has a whole lot more in her. She has been taking it slowly, as she wants to first do an advanced course to make sure her training is effective and safe before going into the longer dives,” Wonka said.

“She definitely has the potential to set a few new UK records.”

There are two more days left in the Suunto series: November 30 and December 21.

The event in November will be static apnea, while the December final event will see competitors showing off their skills in three disciplines: DYN, dynamic no fins and static apnea.