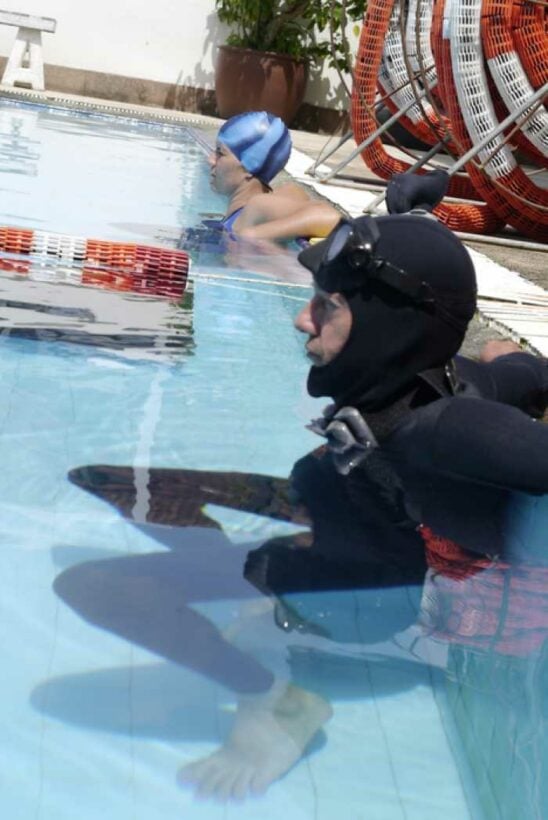 PHUKET: American Katie Wierenga was ranked third among the USA female Dynamic No Fins (DNF) athletes after an outstanding performance at the We Freedive Suunto Series in Phuket on Sunday.

Wierenga covered 105m underwater in what many believe is the most technically difficult of the eight Association Internationale pour le Développement de l’Apée (AIDA) freediving disciplines.

“She had performed in our past DNF competition in June and achieved 107m, but we had given her a red card [disqualification] due to her failing the surface protocol upon surfacing. So getting a white card for 105m was a big achievement this time,” one of the event judges, AIDA Master Instructor Sarah Whitcher, told the Phuket Gazette.

The surface protocol in freediving is a sequence of performances that an athlete must complete within 15 seconds upon surfacing after a dive.

The athlete needs to remove all facial equipment; give one okay hand signal; and say, “I am okay” to the judges on the side of the pool. The AIDA competition regulation is in place to ensure that the athlete is fully conscious and in control when they surface.

Also participating in the event at Phuket Country Home in Chalong last week was fellow American Walter Johnson. Unlike Wierenga, who flew in from Chiang Mai, Johnson is a Phuket expat.

“Walter did a strong performance freedive of 85m, short of his personal best, but we believe he is now intent on keeping his white card record safe in order to win the the overall series prize of new white Suunto D6i computer that will be awarded on the final competition day in December,” said Whitcher.

Johnson is currently in a close battle with local mermaid Melanie Long for the most white cards. However, Long did not compete in the event this month, giving Johnson a chance to catch up.

Three events remain in the Phuket We Freedive Suunto Series, with the next competition, dynamic with fins, getting underway at Phuket Country Home at 10am on October 26.

Those interested in the sport are invited to join in the pre-event training session on October 25, starting at 3:30pm.