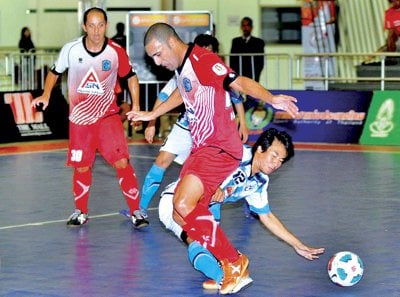 PHUKET: Representatives from the 16 teams set to compete in the Thailand Futsal League’s (TFL) 2012-2013 season, including Phuket United, were told to prepare for an unofficial season opener by October.

The team representatives recently held a meeting with Tirachai Wuthitham, President of the National Futsal Development council, to discuss the commencement of this year’s season.

The indefinite delay had sparked concern among fans, players and team reps that TFL’s star players would choose to play 11-a-side football instead, or even play in other leagues outside of Thailand, lowering the standard of the league.

Mr Tirachai said that the unofficial start will comprise of just a few matches aimed at creating a “futsal buzz” leading up to the start of the FIFA Futsal World Cup, which is set to be hosted in Thailand from November 1-18.

League play will break just before the World Cup to allow national squad players ample time to prepare. The official beginning of the TFL 2012-2013 season will then commence in December, the meeting was told.

Mr Tirachai was also adamant that the TFL FA Cup will be organized, though an official date has yet to be agreed upon, allowing at least 64 qualifying teams, including the 16 TFL squads, a chance to compete.

“We have sponsors for the FA cup already. We still need to discuss when and how to organize this year’s cup.

“There are two options. We can have a lottery draw for all the teams that apply, including the 16 TFL teams, and hold it knockout style. Or, we can give the 16 TFL teams a bye to later rounds, and have the other sides in a knock-out bracket,” he said.