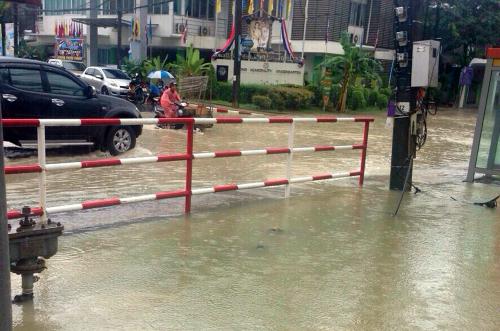 PHUKET: Steady rain in Phuket caused minor flooding this morning at the usual places in Phuket: in front of Patong Hospital and on Chao Fa West Road in Chalong.

However, no roads were reported to be cut off and small vehicles were able to make their way through the water.

Floodwater collected in the area in front of Patong Hospital on Phang Muang Sai Kor Road, but did not prevent vehicles from entering the facility. Hospital staff confirmed that operations were unaffected.

“The flood this morning didn’t stop ambulances from getting in and out of the hospital,” said one Patong Hospital staffer.

“The area in front of the hospital was flooded, but the water is gone now. As we all know, we have a problem with the drains,” she added.

More rain is expected today and tomorrow – in the Thai Meteorological Department weather warning issued at 4pm today, rain was forecast to remain over the Andaman Sea area until Saturday.

Heavy rainfall is expected in the upper part of Southern Thailand, in the Northeast and in the Central regions.