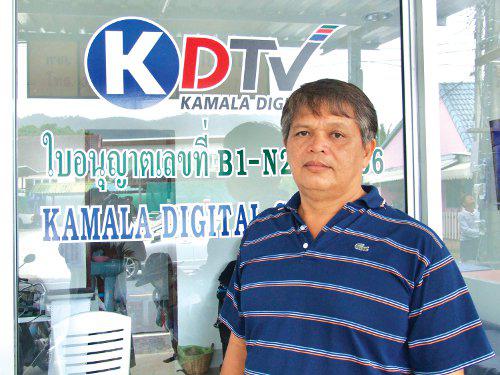 PHUKET: Good news for residents on the island’s north who want to keep up with the world’s top footballing action, but don’t fancy spending their late nights in some hole-in-the-wall leagues away from home: Owner of Kamala Digital Cable TV (KDTV), Niruj Sariya, recently announced new upgrades and plans to continually increase and improve cable TV services in the Kamala area.

“In the coming one to three months, we will start offering cable TV through modern optical fiber cable technology. This application will increase [our offer of] television channels up to more than 100 channels – with a high signal quality, including the full scope of the English Football Premier League with more than 300 matches,” said Mr Niruj.

Initially, KDTV offered only analog TV for local channels, and later expanded their business, joining up with Phuket Cable TV. Now KDTV is available in both analog and digital formats – 120 channels in digital and 86 in analogue formats. In the future, the company plans to offer only digital channels, Mr Niruj said.

He added that most of the current channels are focused on religious programming since many of its customers are Muslims. Currently, there are only a few entertainment channels available, he concluded.