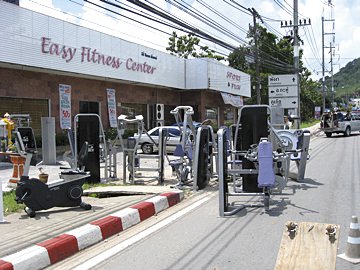 PHUKET: Members of the Easy Fitness Center on Chao Fa West Road in Phuket were left without a gym on April 30, when repossession teams, under police supervision, seized fitness equipment valued at several million baht, forcing the center to close.

The center, which opened in 2005, offered a variety of fitness classes with membership fees ranging from Bt7,200 for three months to Bt24,000 for two years.

Almost 2,000 members lost their Bt4,000 joining fee following the closure, with one couple losing Bt26,500 after joining shortly before it was shut down.

In an effort to recoup their losses, seven members filed charges against center Managing Directors Yvon Van Eyersen and his wife Siripon Sanpat at Phuket City Police Station on May 30.

Case Officer Umporn Musikpan told the Gazette that an arrest warrant for Mr Van Eyersen was issued over a month ago for a separate incident involving alleged misappropriation of around Bt6 million of customer investments in his Phuket Patong Asset Company.

Mr Van Eyersen cannot leave Thailand as his passport has already been seized by Phuket Provincial Court, he added.

“We arranged a payment plan, but after only three months they missed a payment. Then payments became scattered and finally stopped. We were promised more payments would follow, but they never came. We just wanted to be paid. It was a good fitness center, but we had no choice other than repossessing the equipment to try and re-sell to another buyer and recoup the money owed to us,” he added.

Repossession teams, police and SSI lawyers entered the center at 10am on April 30 and immediately began dismantling equipment. Crowds gathered as a crane loaded the equipment onto pickup trucks.

Phuket resident and Easy Fitness member for two-and-a-half years Mrs Gabi Coffin was in the middle of a yoga class when repossession teams entered the center.

“My instructor ended the class and we went out into the gym where about 25 burly men were removing the equipment. Members and employees had not been informed or given notification of closure. Our yoga teacher burst into tears as she watched the men take the gym apart.” Mrs Coffin said adding that many members had lost out.

Other members said that after heading to Fitness Center a few days later, they found a locked, empty gym and a sign on the door with a phone number. Upon calling the number they were told the center was closed due to “financial issues” but would reopen the following week.

The center is still closed, and its owners are unreachable.

“The members have been cheated. This is not a good thing for the Phuket community, they deserve justice,” Mrs Coffin added.