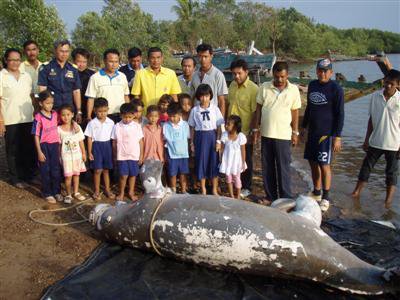 PHUKET: After two years of lobbying by the Phuket Marine Biological Center (PMBC), the government has finally agreed to sign an international memorandum of understanding (MoU) aimed at protecting the endangered dugong population in Thai waters, the Gazette has learned.

Kanjana Adulyanukosol of the Phuket Marine Biological Center’s Endangered Species Unit said the government is now ready to sign the memorandum, introduced by eight member states of the Convention on Migratory Species (CMS) treaty at a meeting in Abu Dhabi in October, 2007.

At a CMS meeting held in Bali in September 2008 last year, representatives of three more nations with dugong populations (Comoros, Kenya and Philippines) signed the agreement, bringing the number of signatories to 11 – but Thailand was not among them.

“I am happy to say that the government has agreed to sign the dugong MoU. We have tried very hard for over two years to get them to sign, but the political situation has been unstable for the past two or three years,” she said.

“After we sign the MoU we will take a more regional and global approach to protecting the dugong and the habitat that sustains them,” said Miss Kanjana.

Seagrass beds, the staple of the dugong diet, have been negatively affected by coastal

development projects in the Andaman Coast region that release accumulations of sediment onto the seabed. This is the most serious long-term threat to the dugong, she said.

Dugong also face more immediate threats in the form of moving speedboats and abandoned fish netting, in which they can become entangled and drown.

Although happy with the agreement to sign the MoU, Miss Kanjana reiterated that it is a non-binding agreement.

She also expects a lack of budget due to the poor economy to limit the number of activities the Department of Marine and Coastal Resources (DMCR) can organize to get all the many relevant agencies on board.

“Next year will probably be the worst in terms of financial support from the government,” she said.

Cabinet unanimously agreed to sign the MoU during a meeting on May 19 this year, though it is still unclear when the document will actually be signed.

The MoU could be signed by Natural Resources and Environment Minister Suwit Khunkitti or one of his deputies at the next CMS meeting, the date of which has not yet been scheduled.

Alternatively, it could be signed earlier through Thailand’s CMS secretary in Bangkok.

“I don’t know exactly when they will sign, but now that we have reached this stage I am not worried about it anymore,” she said.