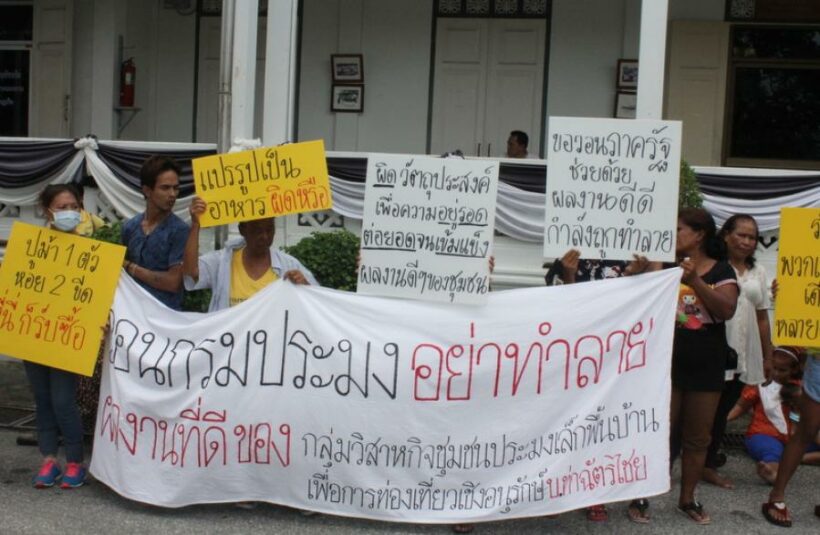 PHUKET: Local fishermen and representatives from fish processing groups yesterday morning gathered at the Damrongdharma Center to ask for help after the Phuket Fisheries Office ordered the closure of the Sarasin Seafood Restaurant in Tah Chat Chai.

“We received a letter from Phuket Fisheries Office on May 26 that they would reclaim the restaurant building, as it was built using the budget provided for fish processing. The building was meant for locals in the community to use together, but officials say it has been misused,” said Mr Ronnakorn.

“We have got about a hundred members now. We invested in the business after we got the building. We were initially using it for fish processing, but stopped after we received complaints about the smell and uncleanliness,” he added.

The group then decided to open up a ‘community restaurant’ at the site in 2012.

“We changed from a fish processing operation to a restaurant, which we named Sarasin Seafood. We have been doing very well so far. We buy fish from local fishermen and the income is divided among members of the community,” said Mr Ronnakorn.

“If officials take the building back, we will lose our income and won’t be able to survive. I agree that the building hasn’t been used for the purpose it was originally meant for, but if it is repossessed, officials must help and advise us about how to earn a living,” he added.

Mr Nonthsak accepted the letter, but said that since the locals were using it for the wrong purpose, government officers had the right to seize it. He added, however, that he would discuss it with the concerned officials and see what he could do.