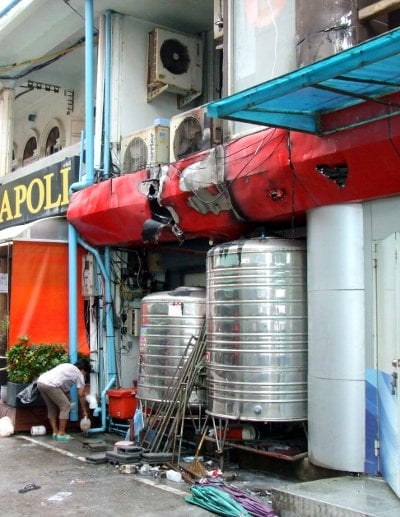 The blaze reportedly broke out from an electrical short inside an air compressor on the second floor of the True Coffee shop, on Soi Patong Post Office.

Firefighters managed to extinguish the fire in about 10 minutes.

A lady selling drinks in the area said: “I saw a thick, black smoke coming out of the air conditioner on the second floor of True Coffee building. I ran away without my staff, thinking I had to save myself first.”

The owner of a nearby shop called the 199 emergency number to report the fire.

Police investigators are trying to determine the exact cause of the blaze.

The firefighters quick response prevented the blaze from spreading to nearby tourist-oriented businesses on the busy soi.

Apart from the fire damage to the air-conditioning system, there was also water damage to computers and other equipment inside Taweewong Post Office.

Patong’s beach road has had numerous fires in recent years, including a spate of arson attacks at the Jintana Plaza complex in 2008 and 2009.