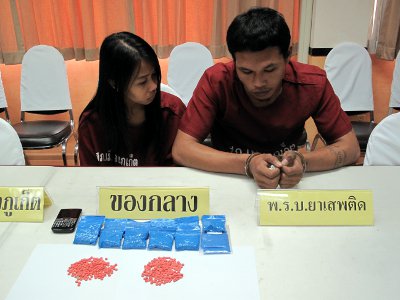 PHUKET: Phuket Police arrested two young cousins from Ratchaburi for possession of 2,600 ya bah (methamphetamine) pills with intent to sell on Saturday.

The pair were identified at a press conference at Phuket City Police Station this morning as Natsuda Nakprasit, 20, and her cousin Naret Radomkij, 19.

Police were acting on a tip-off received by the Phuket Provincial Police narcotics suppression unit, he said.

A search of Mr Natsuda uncovered 400 pills. The pair were then escorted to their shared apartment in Rassada, where 2,200 more pills were discovered.

Miss Natsuda said as little as possible during the press conference.

She and Mr Naret were cousins from Ban Pong District, Ratchaburi. They arrived in Phuket last month unemployed, she said.

Despite the large number of pills involved, it was her first-ever attempt at drug-dealing, she claimed.

She entered the business after receiving a call to pick up the drugs from a man identified only as “Daeng” in Ratchaburi, she said.

Also presented at the press conference were two mobile phones and a Phuket-registered motorbike seized as evidence in the case.

The police will continue to investigate in order to try to identify the kingpin and any other members of his network, Maj Gen Pekad said.