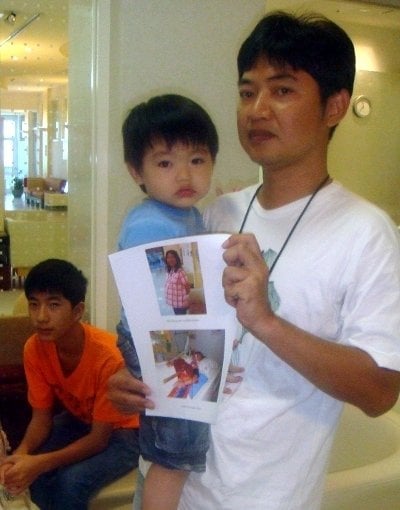 PHUKET: A distraught husband has complained to the local media that his wife is now in a coma following complications after a Cesarean-section childbirth operation at a well-known private hospital on the island.

Arthit Boonnark, 47, told reporters gathered at Bangkok Hospital Phuket yesterday that his wife, 38-year-old Pariporn Jantarothai, fell into a coma not long after giving birth to the couple’s child at 10am on March 18.

Mr Arthit said Mrs Pariporn was pale and having respiratory problems after the birth of the healthy baby boy nicknamed Google.

At about 3pm, her doctor examined her and gave her some medication. Her condition improved temporarily, but then took a turn for the worse and she slipped into a coma, Mr Arthit said.

She was rushed to the ICU where doctors discovered her uterus was hemorrhaging and performed an emergency hysterectomy, he said.

She was released from the ICU on March 19 unconscious and breathing through an oxygen mask, he said.

“My wife underwent a second operation at 11pm the same day. She had been hemorrhaging over 10 hours. Nurses came in but they only checked her blood pressure, even though she was periodically suffering from shock,” he said.

“I asked [the doctor] about her condition a few hours after the hysterectomy and he assured me the bleeding had ceased after he applied stitches, but she continued to bleed all afternoon and into the night.

“They operated again and performed CPR, but she never regained consciousness because her brain had been deprived of oxygen for too long,” he said.

Mr Arthit said his wife’s condition has only improved slightly since. She can move her eyes because parts of the brain stem are still functioning, but all of her higher mental functions are lost.

Estimating her brain damage at 70% to 80%, he said she is unable to respond to stimuli.
Meanwhile, treatment costs at the hospital have mounted to two million baht, an amount he knows he will never be able to pay.

The hospital has provided an unspecified amount in free treatment, but not nearly enough to cover the large and growing bill, he said.

“They have asked me to pay the overdue balance or have her transferred to another facility, but as she is still on assisted breathing I have decided to keep her in the hospital.
“The most important thing is to keep my wife alive. We can deal with everything else later. Right now I and my wife’s parents are very worried about her,” he said.

Mr Arthit, who operates a restaurant in Wichit with his wife’s family, called on the hospital to accept responsibility for his wife’s condition and contact him with updates about her condition.

He has filed a complaint with the Medical Council of Thailand, he added.

The hospital administration declined to comment on the situation, saying that doing so could bias the outcome in favor of one party or the other.

No late closing times for Phuket bars during Songkran