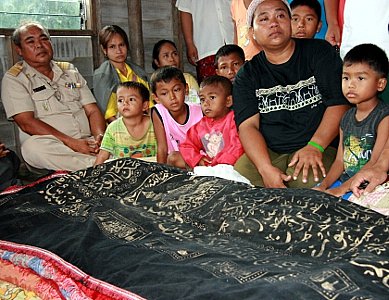 PHUKET: A seven-year-old Phuket boy drowned today while he was bathing beside his father’s fishing boat.

Sukaiya Kunpaw entered the canal in Mai Khao at about midday while his father, 38-year-old Adun Kunpaw, was cleaning his boat.

With tears in his eyes and a wavering voice, Mr Adun told the Phuket Gazette that young Sukaiya was bathing on the other side of the boat as normal.

“I didn’t notice anything was wrong. It wasn’t until 15 minutes later that I saw his feet sticking out of the water,” he said.

Mr Adun frantically pulled his child from the water and administered CPR, but to no avail.

Sukaiya’s mother, Watima Kunpaw, 39, and others nearby helped rush the boy to the Baan Maikham primary healthcare center across Thepkrasattri Road. But it was too late.

Staff at the center could not provide further assistance, Mr Adun said.

Sukaiya’s family then took his lifeless body to Thalang Hospital, where drowning was recorded as the cause of death.

By 4pm, the body was returned home where tearful relatives prepared for a Muslim funeral.

About 100 friends, teachers, neighbors and family gathered at the small one-story house.