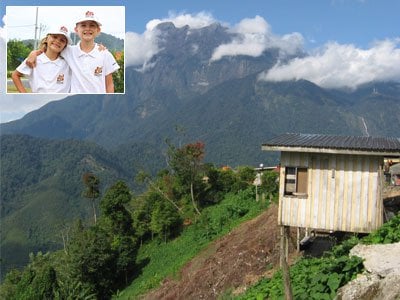 PHUKET: Two young sisters, nine-year-old Kasia Sambrook and her sister Alicia, 6, are in training to scale one of the largest mountains in the region next month in order to raise money for stray dogs.

The two girls have their eyes on the 4,095-meter peak of Mount Kinabalu in Borneo, the fourth highest peak in the Malay Archipelago.

All of their efforts will be in the name of their favorite charity, the Soi Dog Foundation (SDF).

The girls lived in Bristol, England before moving to Phuket five years ago with their father, former UK soldier Frank Sambrook, and their mother Ania from Poland, currently a teacher at British International School.

They family decided to do the climb a while ago, since Borneo has always been a fascinating destination for Ania, who once worked in the mountains of southern Poland.

Kasia and Alicia have a history of helping out at SDF, so they decided to raise funds for the organization through their climb, which will come just one month before a planned relocation to Hong Kong in August.

Their involvement in SDF has included weekly trips to help walk adult dogs and cuddle pups.

They also adopted a dog from the foundation in October last year.

Preparations for the climb have been manifold, ranging from acquiring the correct gear and contacting a trustworthy guide to building up the girls’ stamina for the 2,200-meter ascent.

Sunday treks up the Nakkerd Hills, from Shanti Lodge all the way to the Big Buddha image, have been helpful in improving their muscular strength and endurance. They have also been wearing their hiking boots and testing out head torches and wet weather gear, sporting their SDF garments at every possible occasion.

Although the walk will take place inside Kinabalu National Park, the climb will certainly be no walk in the park for the two primary schoolers. The climb will likely take them two days, with an 8- to 10-hour climb on the first day to reach overnight accommodations 3,272 meters up the mountainside.

This part of the climb will likely be hot, since July is Borneo’s dry season and they will not have reached a high enough altitude to experience a considerable drop in temperature.

They will take regular breaks, but with father Frank reminding them they must make good time to reach the campsite before nightfall.

On day two the climb will start at 3am, allowing for them to top the summit for sunrise and leaving enough time for the entire descent. The pre-dawn leg promises to be the toughest part of the trek, with cold, windy and wet conditions.

Wet weather gear and head torches will be necessary, since both hands are required to hold onto a rope that will guide them through the darkness and up the steep path to the peak.

Kasia is mindful that “that is the scariest bit”, but is reminded that she will be with her mother and father, as well as about a hundred other tourist climbers and experienced porters.

The girls will have to brave temperatures of approximately four degrees Celsius whilst taking in the breathtaking views at the summit, before starting their descent.

For many, this is the hardest part of the climb due to exhaustion and muscular strain.

The girls are weary, but optimistic “we’ll be very tired, but when we get down, there will be hot springs.”

The family are maintaining a realistic and cautious attitude to their climb. Frank and Ania, who will be carrying the backpacks containing first aid kits, have carefully researched the possible dangers they may encounter.

“There are many variables. First of all, the girls ability to keep going, the weather, and altitude sickness which can affect anybody, regardless of fitness or age,” Mr Sambrook explained.

The Sambrook’s view their trip to Borneo as a family adventure and opportunity to raise money for a cause close to their heart. The parents will keep a watchful eye for any headaches, dizziness or stomach problems – all symptomatic of altitude sickness – and will stop the climb if the weather conditions make it too dangerous to continue.

“We may not get as high as we want to, but we will go for the highest we can,” said the former serviceman.

To help support the girls on their journey, visit the Soi Dog Foundation website (soidog.org) or email: homeschoolphuket@yahoo.co.uk