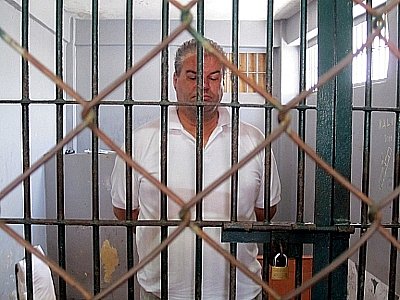 PHUKET: In a day for denying criminal charges at Phuket Provincial Court, Norwegian national and long-term Phuket expat Stein Havard Dokset yesterday denied all charges against him for the murder of his ex-girlfriend Rungnapa Suktong.

Dokset was arrested in a police raid on his luxury villa in Kata on February 28.

Officers searching the house found the remains of a human body concealed in a plastic bin in a locked room in the basement. DNA tests later confirmed the remains to be those of his Rungnapa.

However, Dokset yesterday denied that he concealed evidence of a crime. He also denied being illegally in possession of a firearm, saying that it belonged to his new girlfriend.

To the charge of murder, Dokset maintained his innocence, in line with his confession to police of “accidentally” killing her in a fit of jealous rage.

Chalong Police investigating the case had previously told the Phuket Gazette that the initial findings from the forensics investigation report that a skull fragment found among the remains showed signs of having been hit with a hard object.

Dokset is now set to appear back in court on February 12 and 22 next year, when the court will hear arguments from the public prosecutor, and again on March 8, when Dokset’s attorney will present his defense.

Note: This story was updated by the news editor on August 1 to reflect the fact that Mr Dokset claimed that the firearm found in his home belonged to his new girlfriend and not Ms Rungnapa, as originally reported.