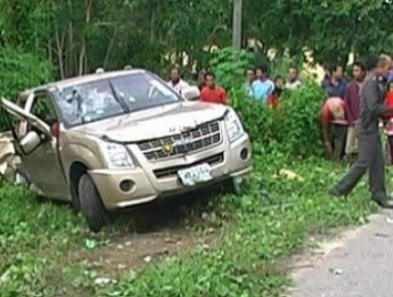 PHUKET: Krabi Police suspect revenge was the motive for a shooting in Khlong Kanan subdistrict on Saturday, when gunmen opened fire on a moving pickup truck in a well-planned ambush.

One person was killed and five others were injured in the attack.

Mr Paruhas, 44, was pronounced dead at the scene of a gunshot wound to the head.

Police said that Mr Paruhas and his companions had just left the Neua Khlong Pracha Bamroong School, where they attended a public hearing over the construction of a proposed new power plant.

Maj Suriya Damrongwattana, an investigating officer with Khlong Kanan District Police, said his office received a report of the shooting at about 6:30pm.

“The shooting occurred opposite the Rak Pai Resort. Witnesses told us that a bronze four-door Toyota with no registration plates pulled onto the road and followed the target vehicle.

“Someone from the back seat shot at the rear of Mr Paruhas’ pickup three times. They then pulled in front of the victim’s truck and continued to fire into the vehicle.

“The truck went out of control and hit a road sign before veering across the center line and colliding with a vehicle coming from the opposite direction,” he said.

Four villagers traveling in the bed of Mr Paruhas’ truck were injured in the attack. Police did not report any injuries from the oncoming vehicle that the truck collided with.

Most seriously injured was Baan Klong Wai Lek deputy headman, 46-year-old Dolwahab Jongrok. He remains in hospital where he is being treated for the head wound. The three other victims have since been discharged from hospital.

In addition to the four villagers in the truck, Koh Sri Boya tambon council chairman Suriya Busabong, who was following Mr Paruhas in another vehicle, was also injured, Maj Suriya said.

“Mr Suriya lost control of his vehicle and crashed into a roadside tree,” the police major added.

“When we arrived at the scene, we counted more than 10 bullet holes in the side of Mr Paruhas’ truck. More bullets destroyed the windshield. Police recovered a total of 20 casings believed to have been fired from an M16 automatic rifle,” he said.

As the attack was well planned, the gunmen must have known their intended target’s intended route and planned the ambush at a curved section of road where his vehicle would have to slow down, Lt Col Wisan said.

“Moreover, there are many escape routes open to the gunmen from this location, making it difficult to catch them [by setting up checkpoints].”

Police are investigating three possible motives for the shooting.

The first involves Mr Paruhas’ involvement in a self-proclaimed “mob” that has been protesting over land rights in the area, known for its vast areas of palm oil plantation. Police suspect the victim may have distanced himself from the “mob” after receiving threats from influential people.

The Royal Forest Department in 1987 granted a large concession in the area to a private operator. When the concession expired in 2003, Cabinet approved a plan to rent half of the land to the private operator, with the rest to made available for use by local residents.

About four months ago, some 2,000 protesters formed a “mob” who have been protesting the failure of the operator to vacate the land earmarked for them.

A second possible motive involves the victim’s role in a project set up to transport coal from Hua Chang seaport in Village 6 to the proposed new power plant in Village 2, a distance of about five kilometers.

“He did not receive payment and that caused arguments,” Maj Suriya explained.

A third possible motive involved a political conflict stemming from the victim’s election as village headman.

Investigators believe the first possible motive is the most likely, as the palm plantation conflict has been the source of frequent harassing gunfire by unknown gunmen directed at the “mob’s checkpoint” over the past three months.

“Police will continue to search for the killers,” May Suriya said.

For an in-depth report on the palm oil plantation controversies across the south, click here.