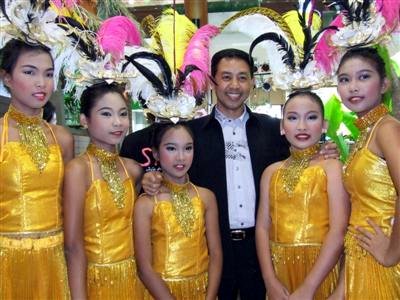 PHUKET: Residents and tourists alike flocked to Central Festival Phuket over the weekend to view the “Good Living under His Royal Kindness” exhibition, a tribute to HM King Bhumibol Adulyadej organized by the Royal Thai Army.

The exhibit, which ran Friday through Sunday, presented the public with information about His Majesty’s life and the countless Royal Patronage Projects he has conceived, implemented and overseen over the years.

Attendees were given small pieces of pink, heart-shaped paper to write messages of devotion upon. These were stuck on a large map of the Kingdom.

On display and for sale were a large number of handmade products, including wicker baskets made of sedge and vetiver grass from the Nernthammang Village, a royal folk arts and crafts center under royal patronage in Nakhon Sri Thammarat.

One of the main highlights came on Sunday with the arrival of Col Sansern Kaewkamnerd, the cool-headed spokesperson for the Center for Resolution of the Emergency Situation (CRES) who disseminated government information during the Red Shirt uprising in Bangkok in May.

Always comfortable with a microphone in hand, Col Sansern led about 50 people in singing Phleng Sansoen Phra Barami, the royal anthem of Thailand, at the 6pm time check.

Children from different schools who attended as part of a singing contest were among those who raised their voices in song.