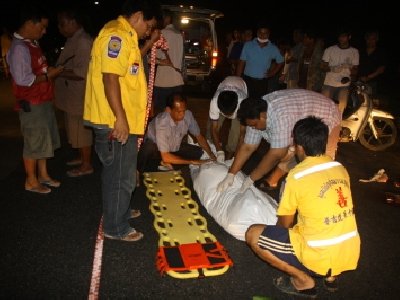 CHERNG TALAY: A construction engineer was gunned down yesterday evening on the main road linking Thalang Town and Cherng Talay.

Cherng Talay Police received a report at 9:30pm that a man had been shot dead on Baan Don-Cherng Talay Road.

Arriving at the scene, Superintendent Witoon Kongsudjai and duty officer Capt Tatchagrit Ritnuang found the bloody, bullet-riddled body of Sirichai Suphansai, 33, lying under a motorbike on the side of the road.

A group of local villagers were standing nearby talking “excitedly” about the incident, police said.

It has not yet been determined whether Mr Sirichai was driving the motorbike at the time of the shooting, police said.

There were three bullet wounds to Mr Sirichai’s body, police said: one pierced the right side of his chest and exited through his back, another was at his left ear and one was under his chin.

The size of the bullets remains unknown.

Local villagers told police that they had heard several shots and went outside of their homes to see what happened. They saw Mr Sirichai’s body, but no sign of the murderer, police said.

The victim, a native of Ubon Ratchathani, was a project engineer at the Tamarind Hills condominium construction site on Soi Layan 2 in Cherng Talay.

Capt Tatchagrit speculated the murder could have been the result of one of three issues: a love affair, personal problems or business problems.