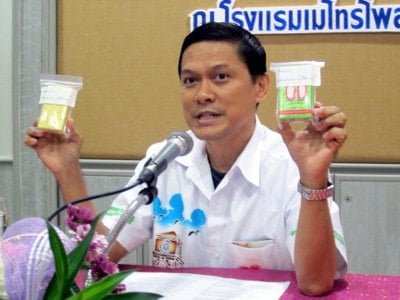 PHUKET: Phuket pharmacists will restrict the sale of products containing ‘methylene blue’ to minors, following reports of youths taking the compound to avoid testing positive for methamphetamine use during drug tests.

The announcement came during a special meeting on Saturday led by Kiattisak Parnrungsri, secretary of the Phuket Pharmacists Club; Duangjai Pasarphan, pharmacist with the Phuket Provincial Public Health Office (PPHO); and Jindee Satikayavakul, president of the Phuket Drugstore Club.

The special meeting followed a report that some youths were taking the ubiquitous compound in pill form in order to turn their urine blue, rather than the tell-tale purple that indicates a positive result during testing with the Government Pharmaceutical Organization’s “Meth Cassette” test kit.

“Teams were sent to do urine tests in several places, including schools, as part of the government’s recent crackdown on drugs. We found that methylene blue was being used to alter test results,” said Mr Kiattisak.

The Phuket pharmacists will now make it a priority not to sell any medication containing methylene blue to anyone under the age of 18, Mr Kiattisak said.

However it might be a difficult task keeping methylene blue out of kids’ hands, given its widespread use in society.

“Meth blue is a chemical used in several industries. The textile industry uses it as a dye, the aquaculture industry to kill parasites, and the dairy industry to test the quality of milk,” he explained.

In medicine, methylene blue is used as a diuretic and to relieve inflammation in the urinary tract, he said.

Last week, PPHO chief Dr Sak Tanchaikul said a group of students had taken methylene blue pills “to induce vomiting” and to make it more difficult to detect traces of ya ice (crystal meth) in their urine by turning it blue.

Isolated cases of blue urine coming up during drug testing had confused health officials in the past, but now that authorities know the cause – and how to deal with it.

“Teenagers who think taking ‘meth blue’ will prevent them from being caught are totally wrong,” said Mr Kiattisak.

Blue urine is a more damning result than purple, since the urine test is known to turn up occasional false positives, he said

“If you take the drug test and your urine is purple, it does not necessarily mean that you have been taking drugs. It is just a way for us to know which urine samples should be sent to the laboratory to get official confirmation [using a more accurate testing procedure].

“But if your urine is blue or green, as is the case after taking ‘meth blue’, there will be even greater suspicion. You will probably be detained until your results are cleared,” he explained.

“We are now using hi-tech chemical analyses in the laboratory. No traces of drugs can be hidden from us,” Mr Duangjai said.