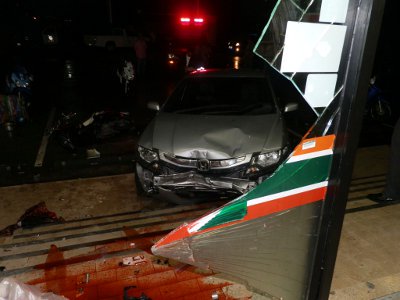 Just before 2am, Thalang Police were notified of the accident, at the 7-Eleven inside the PTT gas station on Srisoonthorn Road in Cherng Talay.

Arriving at the scene, officers found a Phuket-registered Honda City had crashed into the plate glass front window. Two motorbikes parked in front on the store were also damaged.

Two friends exiting the store at the time were injured.

Yingsak Na Nakhon, age about 30, suffered a bad gash to his right thigh and was bleeding profusely. Kusoldharm Foundation rescue workers rushed him to Thalang Hospital for treatment.

Suffering a much less serious injury was 37-year-old Thom Bang-iam, whose foot was slashed open. He was treated at the scene and did not require hospital treatment.

Rescue workers said the driver, who would not give his name to reporters, did not appear to be under the influence of alcohol.

Witnesses said the car was pulling in to the 7-Eleven parking lot when it crossed over a sidewalk and fishtailed on the grass.

The driver likely tried to slam on the brakes to avoid hitting the front of the store, but hit the accelerator by mistake, they said.

Police took the driver to Thalang Police Station for questioning.