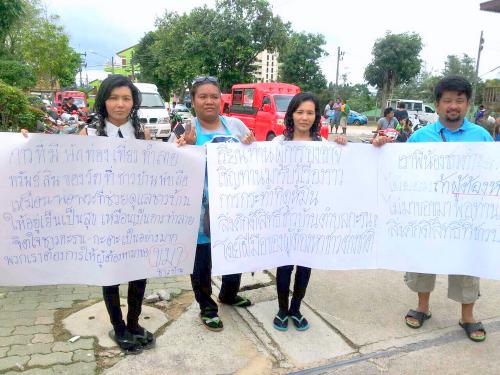 PHUKET: About 200 Phuket residents yesterday demanded an apology from the Russian tourist who damaged a statue of revered historical abbot Luang Por Kongdet during a drunken spree late Tuesday night.

If the tourist, Oleg Fomenko, 31, or the Russian honorary consul for Phuket do not apologize within seven days, there will be protests, the residents warned.

Mr Fomenko was brought in for questioning by the Karon Police after they identified him from CCTV footage at the temple (story here).

The video showed a man dressed in black pushing over a statue of Luang Por Kongdet, a revered former abbot at Wat Karon, officially known as Wat Suwankhirikhet.

Mr Fomenko admitted he was the man in the video, but said he had no recollection of his antics that night as he had been drinking.

“If police cannot have him released from prison for this, they should find a representative or ask the Russian honorary consul to apologize.

“We will give seven days. If we do not receive an apology by then, we will stage a protest and block access to Karon Police Station,” she stated.

Ms Aroonsri explained that the late Luang Por Kongdet was well respected throughout the community.

“We all respect Luang Por Kongdet. If a statue of him is damaged, our hearts are damaged too,” she said.

“The suspect is now in court custody. Whether or not he could be released to make an apology is up to the Phuket Provincial Court,” he explained.

“However, we will do our best to have him or a representative make an apology,” Lt Col Pachai said.

“Just give us seven days to make it happen,” he added.