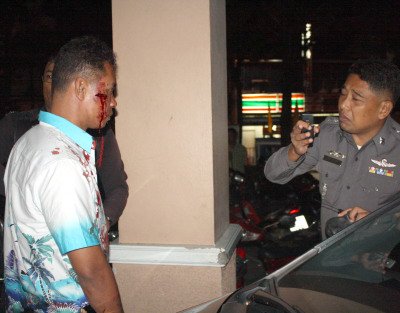 PHUKET: A Chalong civil defense volunteer has been charged with attempted murder following a jealousy-inspired shooting outside the home of a romantic rival last night.

Chalong Police were notified of the shooting at about 11:30pm.

Arriving at the scene, in front of a house on Soi Nakok in Chalong, police found a 7.65mm pistol and a bloody sword known in the vernacular as a “Sparta” blade.

By the time police arrived, the shooting victim had already been rushed to Vachira Phuket Hospital by Phuket Ruamjai Kupai Foundation rescue workers. The shooter had already fled the scene.

Subsequent investigation revealed that the shooter, later identified as 38-year-old civil defense volunteer Nipat Chairat, arrived at the home of 36-year-old Sarawut Sutthikarn and challenged him to a fight.

“If you dare, come and face me,” challenged Mr Nipat, who had fought and lost to Mr Sarawut a month earlier over the affections of a certain karaoke bar hostess.

Mr Sarawut, who had been drinking inside the home at the time, emerged with his Sparta blade at the ready.

In the subsequent encounter, Mr Sarawut managed to take a slice out of Mr Nipat’s face and cheek before he was shot twice, once in the back and once in the right arm. Mr Sarawut also suffered facial wounds to the face from a pistol whipping.

Mr Nipat fled the scene after the shooting, but the pair were later reunited at the Vachira Phuket Hospital emergency room.

Mr Nipat has been charged with attempted murder.

No attempted murder charges have been filed against Mr Sarawut, as erroneously reported by one ‘media outlet’.