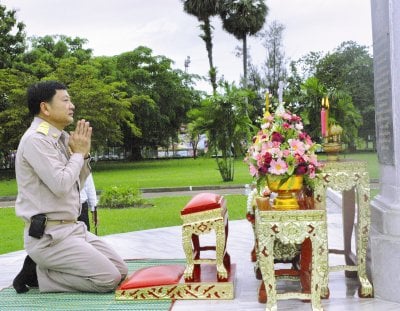 PHUKET: New Phuket Governor Tri Augkaradacha began his work this morning by meeting honorary consuls from 11 nations and assuring them that tourism development is his top priority.

He then met and accepted congratulations and best wishes from the honorary consuls of Australia, the Czech Republic, Denmark, Estonia, France, Germany, Holland, Ireland, Italy, Norway and the UK.

Gov Tri, who has a master’s degree from the University of Kentucky in the USA, conducted the meeting in English.

The meetings, initiated by former Governor Wichai Phraisa-ngop, were a valuable way of exchanging information about problems facing Phuket’s large expatriate community and working together to find solutions, they said.

Gov Tri acknowledged the request and told the honorary consuls not to worry, because as tourism development is his top priority, assuring the safety of visitors was one of his primary objectives.

He will also work hard to protect tourists from being taken advantage of during their stays here, he said.

Czech Republic Honorary Consul Anurak Tansiriroj, also current president of the Phuket honorary consuls group, told the media after the meeting that there were many long-term problems Gov Tri needed to address.

These included taxi prices and public transport issues in general, crime and slow processing of passengers arriving and departing at Phuket International Airport.

“The high season for tourism is coming soon. One of the first problems that needs to be fixed is the services at Phuket International Airport.

“There should be more x-ray machines and [luggage] conveyor belts at the airport to better serve the large number of tourists. Some people who arrive at the airport well ahead of time still almost miss their departing flights after wasting so much time standing in line,” he said.

These and other issues will be raised again at the next consuls’ meeting scheduled for November 22, he said.

Speaking to the media after meeting with the consuls, Gov Tri said he planned to produce a short documentary extolling Phuket as a tourist destination. The production could be distributed internationally during tourism road-shows abroad, he said.

Gov Tri said he will meet with relevant staff later in the day to discuss the technical aspects of the project. The production would have to be dubbed into the languages used in countries that are Phuket’s primary sources of tourists, he said.

“My second major concern is trash management. I would like to set up a trash separation center in each local administrative area. The more trash we separate, the less needs to be burned at the incinerator,” he said.

Trash separation can also create a new source of revenue, he added.