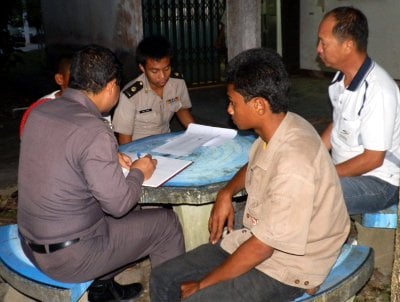 PHUKET: A 28-year-old man, with a history of mental illness, was found hanged in the communal bathroom at Phuket’s Bang Jo Detention Center this afternoon.

The family of Theerayuth Thorthip, whose body was found at 4:20pm, have accepted the death as suicide, said police.

Mr Theerayuth was sentenced on September 10 to serve a minimum 45 days on a minor drugs charge with possible release on good behavior. At the earliest, he may have been released next Wednesday.

Lt Col Watcharin Jiratthikanwiwat of the Thalang Police, the same officer who arrested Mr Theerayuth, responded to the report that a man had died at the facility, called in at about an hour later.

During questioning by police, corrections officer Ariya Loylom said that he had ordered the inmates back to their rooms at 4pm, as usual.

When Mr Theerayuth was found to be missing from his quarters, officers launched a search and soon found his body in the communal bathroom, Mr Ariya said.

Mr Theerayuth was hanged by the neck by shreds of a torn prison blanket tied together, he added.

“We pulled him down and tried to revive him, but that didn’t work. We rushed him to Thalang Hospital, but he was pronounced dead on arrival,” Mr Ariya explained.

Relatives told police that Mr Theerayuth had a history of mental illness and had been on medication at the time of his death.

He had also previously received treatment at the renowned Suan Saranrom Hospital in Surat Thani.

As the family have accepted the death as suicide, the police will not continue any further investigations into the death.

The Bang Jo Detention Center is a low-security Department of Corrections facility operated under the responsibility of Phuket Provincial Prison.

The center is primarily used for inmates about to reintegrate with society after serving sentences at Phuket Provincial Prison or for people serving short sentences.

World Sports: Pietersen to come back with a bang: Flintoff