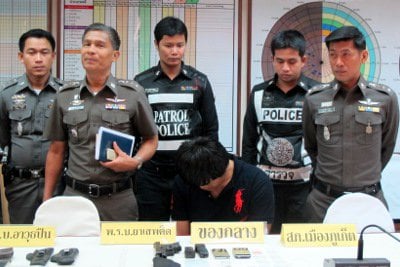 PHUKET: Phuket Police arrested a fellow policeman on Saturday just hours after he was named by another drug suspect for involvement in the sale and distribution of ya ice (crystal methamphetamine).

Mr Mana was arrested at 5am on Saturday at an apartment in the Phun Phol area of Phuket Town. He was charged after being found in possession of just over four grams of ya ice and 20 ya bah (methamphetamine) pills, explained Col Jamroon.

After questioning Mr Mana, police returned to the same apartment block at 11am and arrested Sen Sgt Maj Kumthorn. He was in the room next door to where Mr Mana was arrested earlier, he added.

Sen Sgt Maj Kumthorn was charged with possession of a two unregistered handguns and 1.29 grams of ya ice, Col Jamroon told the Gazette.

“Sen Sgt Maj Kumthorn has denied the allegation that he sold the drugs to Mr Mana. He has also declined to offer any further information, including which police station he is posted at,” he said.

Col Jamroon declined to confirm whether Sen Sgt Maj Kumthorn remains on active duty or whether he had been released on bail.

He did not disclose whether or not Sen Sgt Maj Kumthorn presented his police identification badge upon arrest or whether any special measures had been taken to ensure his safety.

Although Mr Mana was presented to members of the press at Phuket City Police Station this morning, the current whereabouts of Sen Sgt Maj Kumthorn were not disclosed.

Phuket City Police Superintendent Sermphan Sirikhong explained that Sen Sgt Maj Kumthorn, who was at the police station earlier this morning, was “exercising his right” not to appear in public.

Phuket Provincial Police Deputy Commander Chamnan Pannabon, also at the press conference this morning, told the press, “We are continuing our investigation.”

Ailing dolphin under treatment in Phuket