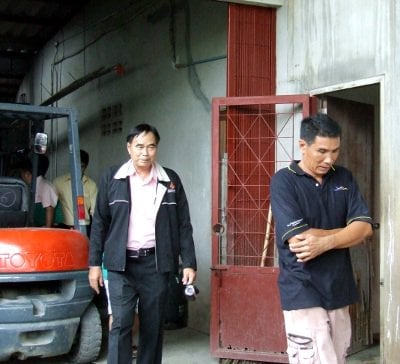 PHUKET: Fears of a serious explosion at a local store illegally refilling gas cylinders prompted a raid by officials from the Phuket Energy Office this morning.

Energy chief Jirasak said, “Normally, small shops are not permitted to refill household gas cylinders because it’s dangerous and may cause a serious explosion, like the explosion in Phra Pradaeng in Samut Prakarn in 2004.”

“There are a few places [in Phuket] that we believe refill gas cylinders illegally. We know about them but we do not have enough evidence to arrest anyone – yet,” he added.

However, instead of finding equipment used to refill gas cylinders, officers found that seven large gas tanks at the store were about four kilograms lighter than they should be.

“The legally acceptable range for discrepancy is not more than half a kilo,” said chief Jirasak.

“The cylinders were brought in from Surat Thani and we don’t refill any gas cylinders here. If the gas tanks weigh less than than the standard amount, then it’s probably because of the factory in Surat Thani or the company that delivers them,” he said.

“We will investigate this case further,” said Mr Jirasak.