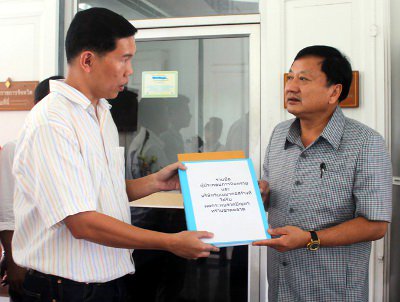 PHUKET: A group of construction contractors and building material retailers yesterday gathered at Phuket Provincial Hall to protest the cost of building sand, which has spiraled upward following the raid and closure of an illegal quarry in Phang Nga.

“Since the operator is under investigation, the DSI banned the company from excavating any more sand or selling any of their stockpiles. That directly affected us.”

“All of the sand that used to be sold in Phuket was from Phang Nga. Now suppliers have to buy sand from other provinces at much higher prices. It is having a serious, wide-reaching effect on the local economy,” Mr Piroj explained.

Prices of sand have nearby doubled and the shortage is forcing many construction projects in Phuket, including hotels and housing developments, to grind to a halt.

“Sand is one of the most important materials, used in all kinds of building work. Those of us who have come to file the complaint today want to a new source to buy sand at reasonable prices to get our businesses going again,” Mr Piroj said.

“We used to pay 500 baht per cubic meter, but now we have to pay 1,000 baht. The price is much higher than we used to pay and the volume of sand available is not enough to meet local demand,” he added.

Mr Piroj called on Governor Tri and the Phuket Chamber of Commerce to help locate a local source of inexpensive building sand.

“Or they could help by negotiating with the DSI to allow us to continue buying sand from the quarry in Phang Nga until the case is finalized,” he said.

“I would like government officials to clearly define areas where sand mining is allowed and where it is forbidden. Current regulations are unclear, which could cause the problem we are facing now to recur again and again,” he said.