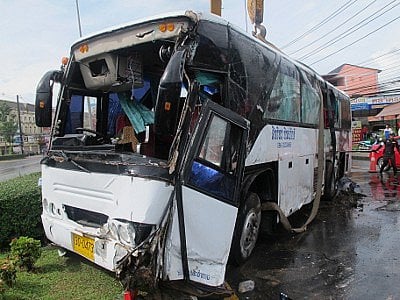 PHUKET: The overturned bus that blocked Thepkrasattri Road northbound early this morning, causing long tailbacks during rush hour, has been moved and traffic is now flowing freely along the busy Phuket road.

At the scene, Sen Sgt Maj Kitti Klaisamniang of Phuket City Traffic Police told the Phuket Gazette that there were no passengers on board the bus at the time of the accident.

“Only the driver was on board. He suffered minor injuries, but was taken to Vachira Phuket Hospital as a precaution,” Sgt Kitti said.

The bus was heading north when the accident happened at 3am.

“The road was slippery because of the rain, and the driver lost control of the vehicle when he tried to negotiate the curve,” said Sgt Kitti.

The bus overturned after it rammed into the concrete block barricade that separates traffic flow along the usually busy stretch of road.

Police have yet to clear the debris from the skittled concrete blocks.

Motorists are urged to exercise caution when driving through the area.