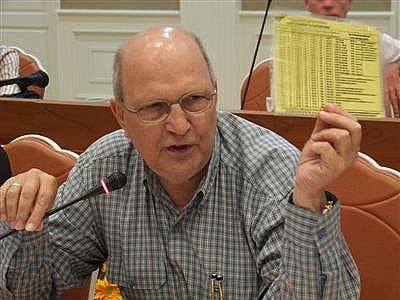 PHUKET: Following the success of the honorary consuls’ meetings in Phuket, the Thai Ministry of Foreign Affairs (MFA) has announced that a nationwide gathering of all honorary consuls will be held at the ministry in Bangkok next month.

News of the meeting was announced by Korn Suwanasai, director of the MFA Passport office in Phuket, at the first Phuket Honorary Consuls Meeting in 2011, chaired by Phuket Governor Tri Augkaradacha at Phuket Provincial Hall yesterday.

Organized by the MFA Department of Protocol, the Bangkok meeting will take place at the MFA offices on Sri Ayudhya Road on March 9, starting at 10:30am.

Jet-ski scams and overpricing by taxi and tuk-tuk drivers dominated the agenda at yesterday’s meeting.

Governor Tri began the meeting by outlining progress made since the previous meeting, including the introduction of maximum rate fares agreed to by some 80% of tuk-tuk drivers in Patong, all members of the Patong Taxi Federation.

The consuls were also shown slides of uniforms and ID badges to be worn by the federation members.

German Honorary Consul Dirk Naumann lauded Gov Tri for his efforts to address taxi and tuk-tuk issues, saying, “Our new governor has done more in three months than his predecessors did in three years.”

A tangible result of this was freeing up of parking spaces along the beach road in Patong, which before were almost completely monopolized by taxi drivers, tuk-tuk drivers and vehicle rental operators, he said.

However, Mr Naumann said the set fares in Patong were too expensive, producing documentary evidence that the rates were several times higher than in Bangkok – and more expensive than in Germany, where the cost of living overall is much higher.

Patong Deputy Mayor Chairat Sukhaban argued that Patong’s mountainous terrain, one-way road system and other factors all conspired to make operating costs in the seaside town higher than many realized.

Open-air tuk-tuks were more expensive to buy than air-conditioned taxis, he added.

Mr Naumann said that if that was the case, then air-conditioned taxis should be used instead of the two-stroke tuk-tuks.

Governor Tri said that the fares, which impose a maximum fare of 200 baht for journeys within Patong, plus 50 baht per head for each additional passenger above four, would be reassessed after a three-month trial, after gaining feedback from tourists.

The 200-baht fare was a maximum and passengers were free to negotiate cheaper fares for short journeys, he added.

The ultimate goal was to have all tuk-tuks legally registered with yellow plates and fitted with meters, which would naturally lead to a reduction in fares, he said.

He asked for three more months to make further progress on this and several other matters of concern raised by the consuls during the meeting.

One recent report generated within six hours some 150 online comments by other tourists who said they had been similarly taken advantage of during their holidays in Phuket, he said.

The level of abuse had already prompted the Australian government to issue a formal advisory not to rent jet-skis in Phuket, yet problems persist and Australian tourists don’t know where to turn for help when they are victimized, Mr Cunningham said.

He called for police to establish a police box on Patong Beach to report such abuses.

Informed that both Patong Police and the Tourist Police already maintain boxes on the beach, he said they were too distant from where the abuses were taking place, typically on the stretch of beach near the Holiday Inn resort.

The mandatory insurance scheme for jet-ski operators was “gone with the wind” due to lack of compliance, he said.

Noting that Krabi province recently banned jet-skis, he also queried whether the actions of “influential people” were responsible for perpetuating the situation, which he said badly damaged Phuket’s reputation worldwide.

Phuripat Theerakulpisut, Chief of the Marine Police branch in Phuket, denied that influential figures were involved.

“They aren’t rich people like you,” he told the Australian.

He also pointed out that his officers lacked the legal authority to arrest operators who brought in jet-skis from other provinces.

British Honorary Consul Martin Carpenter told the governor that he had received at least two reports of tourists who claim to have been drugged, one remaining unconscious for 16 hours afterward.

He also called for more police officers with special training in dealing with victims of sexual assault.

Phuket Provincial Police Superintendent Pekad Tantipong said officers with this kind specialized training were few in number throughout Thailand, and most that did have the training were assigned to Bangkok.

Consular staff should be allowed to accompany VIP visitors and other special cases right to the gate when departing, as they are allowed to do at other airports in Thailand, she said.

Irish Honorary Consul Helene Fallon-Wood thanked Maj Gen Pekad for his assistance in helping to track down an eight-year-old boy who had been reported missing since June 2010.

Mr Scheffczik, arrested on Monday at his home in Chalong, will be charged with Internet fraud.

He had been living illegally in Thailand for three years with his Thai wife and two children since his passport was taken away.

Mr Naumann said he had personally taken away the German’s passport.

Numerous other issues were discussed during the two-and-a-half hour meeting.

The next local consuls’ meeting is scheduled to take place at Phuket Provincial Hall at 2pm on May 23.