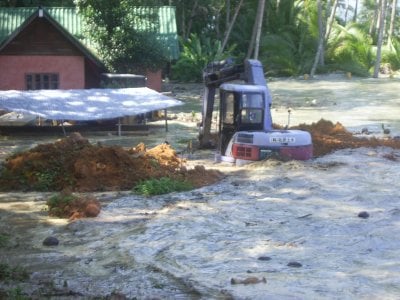 PHUKET: Emergency response units have been scrambled after waters off Phuket surged onto land this morning, washing away homes on the east coast and causing damage at resorts all along the west coast.

The sea rose after tremors from an earthquake just before 7 am off Sumatra, Indonesia, that measured 8.1 on the Richter scale.

At 11 am, Phuket International Hospital confirmed that at least 10 people had been admitted for serious injuries, and that many more were expected to arrive.

At Bangkok Phuket Hospital, many other injured people had been received, though a total could not be provided.

The Gazette has received reports of deaths in Kalim, in Thalang, though that report has yet to be confirmed.

Kawee Sukunthamath, Chief of the Phuket Office of Disaster Prevention and Mitigation (ODPM), has told the Gazette that homes along the west coast are being evacuated as a precaution.

The move follows waters at Khao Khat, on the east coast, reaching up to about 300 meters inland, washing coastal homes and vehicles away. People were holding on to whatever they could to stop from being swept away.

In Patong, Gazette columnist Woody Leonard reported, “A giant wave went up the beach, at least as far up as Beach Rd … People were running from the beach as fast as they could. The beach is devastated … There were a lot of people on the beach, [and they were] swept away by the wave.”

The waters reached as far inland as the Club Andaman Resort.

K. Kawee said that the tremors were also felt in Phang Nga, Ranong, Krabi, Trang and Pattani. The Gazette received a report that the surge left a Royal Thai Navy ship at Tab Lamu naval base beached.