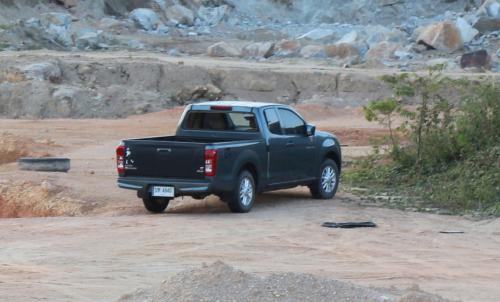 PHUKET: The pickup truck rigged with a bomb that was found parked at Phuket City Police Station over the weekend belonged to a man who was shot dead in Pattani on May 9, police have confirmed.

The truck, found on Saturday (story here), was loaded with 180kg of explosive material.

“He was shot dead in Pattani on May 9, when his pickup truck was stolen,” he said.

The pickup truck was fitted with license plates stolen from a vehicle registered in Nonthaburi, so officers had to confirm the owner by cross-matching the engine number, Col Sermphan explained.

“While checking his name with police records, we learned that Pattani Provincial Police had a report that Mr Withan was shot dead during what seemed to be a car heist,” he said.

Mr Withan was living in Pattani at the time, Col Sermphan added.

While dismantling the bomb in a remote quarry this morning, experts from the Explosive Ordnance Disposal (EOD) unit found that the bomb was set to explode at 2:02pm on August 1 – the same day that an explosion detonated in the car park at Phuket Provincial Hall (story here).

“We spent one hour removing the two gas cylinders from the truck and placed them in a crater as a protective measure while inspecting them,” Col Sermphan explained.

The total weight of the tanks was 180kg, even though they were labelled as having a capacity of only 16kg each, an expert assisting with bomb-defusing exercise told the Gazette.*

“EOD officers from Pattani will return to their base in the South with the dismantled bomb to examine it more closely,” Col Sermphan noted.

“At this stage I have yet to be informed of what explosive material was used. Nonetheless, it looks like it was a time bomb,” he said. “The person who made it could well be a professional.”

Col Sermphan explained that his officers first noticed the pickup parked in front of the police station in October.

“We thought it belonged to a resident in the area,” he explained.

“We are now checking CCTV in many areas to identify who parked it there,” he said.

“Officers have been ordered to check any vehicle that has been parked in the same place for a long time,” he said.

“This is for the safety of tourists and local residents,” Maj Gen Ong-art said.

* The story originally attributed these facts to Col Sermphan. The error is regretted.