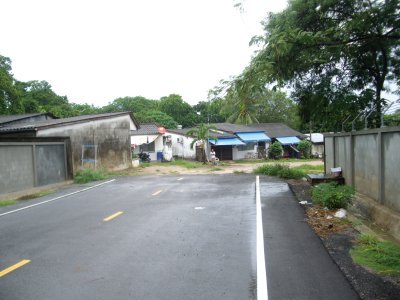 PHUKET: Budget problems are holding up work to complete a road linking the bypass road to a section of Ekwahnit Road near the back entrance to Surakul Stadium.

Work on the project, known jokingly as the bypass-bypass road, was stalled for months because the road was blocked by a home belonging to a family of squatters who settled the area some 20 years ago and had no place else to go.

Phuket Governor Wichai Phraisa-ngop took up the matter himself, asking Wichit Municipality to build new accommodation for the family in the nearby low-income community behind the stadium.

When completed, the new road will run through the center of the community, over the same terrain as a dirt road already there.

Like a scene from circa-1989 Berlin, Gov Wichai in March took the first sledgehammer swing in the offensive to bring down the wall and finally open the route to traffic, but work to pave the final 70 meter stretch has still not begun.

Although construction of the road was started by Wichit Municipality, Gov Wichai transferred responsibility to the Phuket Provincial Administration Organization (PPAO) on March 24.

The project was not in the PPAO’s budget for this year, causing delays while the money was found.

The PPAO has finished the design of the last stretch of the road and the drainage alongside it.

On June 24, a budget of 1,072,000 was finally approved. The money will go to the Department of Supplies and Property, which will purchase construction equipment and open a bidding process for the contract.

Deputy director of the PPAO’s Public Works Division, Wassana Sriwilai, says she expects this to take around one month.

Whichever company wins the bid will then have 90 days to complete the project, she says.

Mother of Phuket murder victim tells of her pain