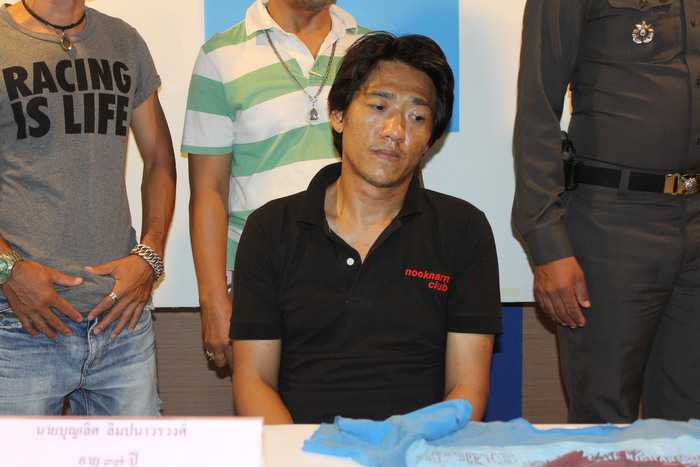 PHUKET: A local butcher robbed a 7-Eleven of 1,000 baht at knifepoint early yesterday morning, then used the stolen cash to pay for a prostitute, a deputy commander of the Phuket Provincial Police revealed today.

Wichit Police received a report from the Tung Charoen 7-Eleven branch at about 4:20am.

“There were three staff working at the time of the robbery, but two of them were in the back storage room while the other was at the counter,” Phuket Provincial Police Deputy Commander Arayapan Pukbuakao told the Phuket Gazette today.

“The staffer at the counter told police that the suspect walked in with a knife and threatened him with it, demanding money. The staffer was afraid, so he handed 1,000 baht cash to the suspect. The suspect then left the store.”

Police arrested Boonlert Limpapanon, 37, at about 5:30pm yesterday after they reviewed CCTV footage from the store and identified him as a local butcher.

“Mr Boonlert told officers that he spent the money on a prostitute in Soi Phoon Phol 11,” Col Arayapan said.

Mr Boonlert was charged with theft and with carrying a deadly weapon in public.

“We are questioning him to determine whether he is connected to any previous 7-Eleven robberies on the island,” Col Arayapan added.

A regional 7-Eleven manager praised police for their work, and urged staffers to take care while working, especially at night.

“We would like to thank police for arresting the suspect,” said Meesak Sae-kok, the manager of CP All Public Co Ltd responsible for all stories in Rawai, Wichit and Chalong.

“We already have our night staff keep less money at the counter, so we hope that in the future thieves will realize that there is not much cash to steal, and that this eventually leads to a decrease in robberies.

“We have advised our staffers not to fight back in case there is a robbery. Just let them take the money, but call the police immediately after and leave the rest to them.”